Campaigners rally to save nurseries across the country 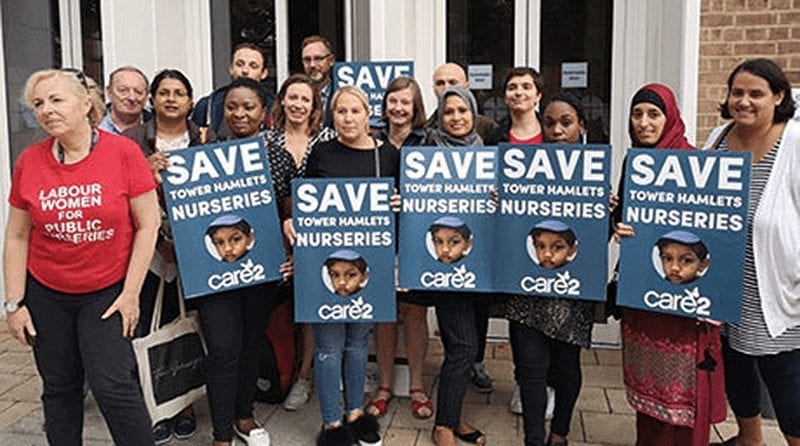 With increased numbers of council-run and community nurseries closing, campaigners across the country are joining forces. Members of the ‘Save Our Nurseries’ campaigns in Tower Hamlets, Salford and Nottingham held a rally in Salford on October 27th in honour of their campaign.

As well as this, campaigners joined with the GMB union and lobbied their local council after gathering 1,500 signatures on a petition which resulted in an 8-week pause on Birmingham City Council’s plans to privatise 14 community nurseries.

In October, Birmingham City Council agreed to consider plans put forward by the GMB union who have tried to identify practical alternatives to privatisation including a 12-month trial for the alternative options proposed. An 8-week pause on the existing plans, now means these options have been given a window of opportunity.

“We fully understand the huge pressure facing councils after eight years of drastic cuts to funding. However, as the trade union for nursery workers, we know that this provision is vital.

“We’re still in discussions with the council, but we remain committed to pursuing all available options to keep Birmingham’s community day-nurseries going.”

In Tower Hamlets, London campaigners have received a lifeline in their attempts to save the remaining council-run settings in their borough. The Overview and Scrutiny Committee endorsed a ‘call-in’ signed by 5 Labour councillors which questioned the Executive Mayor’s decision to close Overland Children’s Centre in Bow, which provides specialist support for children with deafness and autism. It also questions the closure of John Smith Children’s Centre in Whitechapel, and the Mary Sambrook Day Nursery in Shadwell.

This endorsement means the decision to close the nurseries will now be considered by the council’s Legal and Monitoring Officer. If they believe these closures contravene the council’s policy framework, the decision will be referred for reconsideration.

Candace Reading from the Save Our Nurseries campaign said:

“We are not giving up. We really see the value in these nurseries and nothing has been put in place to replace them.

“The integrated support provided in conjunction with neighbouring Children’s Centres at John Smith and Overland meant specialists could co-ordinate early intervention for vulnerable children. There are over 100 children on the waiting lists for these nurseries, many of whom have additional needs, now with nowhere else to go.

“Our campaign will continue, and we are joining forces with other campaigns around the country, including Salford, Nottingham and Birmingham, whose nurseries are threatened.

At the rally that took place on Saturday 27th October, parents and staff joined forces to fight for their nurseries. Worsley and Eccles South MP, Barbara Keeley, and Salford MP, Rebecca Long-Bailey, and a representative of the UNISON trade union spoke at the event.

In Salford, all 5 of their council-run nurseries have been under threat of closure since February with the council looking to plug an early years service’s budget-gap of £1.75 million.

Mayor, Paul Dennett, agreed to extend the funding for these nurseries until August 2019. However, he cited funding cuts and changes to the Dedicated Schools Grant as the reason he could not commit past this point.

The Salford Save Our Nurseries campaign included a 1,000-strong march through the city, a meeting with MPs in Westminster and a discussion with the Children and Families Minister, Nadhim Zahawi. The rally proved to be a great way of bringing together different groups of campaigners fighting for their nurseries.

“When we met with Nadhim Zahawi in May, one of the things he asked was, “Why only Salford?” In Salford, we were able to mobilise a campaign very quickly, but it is actually an issue affecting all local authority day nurseries, because all council budgets have been cut.

“We do have a lot of support nationally and we are looking to join together with all nurseries who are under similar threat of closure, or are facing financial pressures. Some, like Tower Hamlets, are in an even worse situation than us, and it all hinges on what we can get from central Government.

“Nursery schools have supplementary funding until 2020, so we are trying to join with them to be part of that funding, and help them in their fight to secure further funding beyond that time.”

In Salford City Council’s most recent consultation, it was proposed that its nurseries would be dissolved to local schools and other providers, with the consultation closing on 18th October. However, the Save Our Nurseries campaign group is still hoping that they will be able to get sufficient funding from the Government to ensure the nurseries continue to be run by the council.

Save Our Nurseries has called for 10 conditions to be met by any proposals made for the future of their nurseries, including:

Graham Stringer, MP for Blackley and Broughton, praised the work of Salford’s Save Our Nurseries campaigners, stating:

“This has been one of the most successful and effective campaigns in the whole of the country to protect vital services for children.

“This has shown the strength of parents, councillors, trade unions and MPs working together.”

“Salford’s nurseries provide a vital service to children and parents across our community, transforming the lives of the next generation by guaranteeing them an excellent education when they most need it”.

Despite appeals from Nottingham City Council and MP for Nottingham North, Alex Norris, The Once Upon a Time Nursery was closed at the end of July after a college board vote of seven to two in favour, following its “consistent underperformance against budget”.

Mr Norris said: “Good nurseries are a key part of helping our children get the best start in life. When an incredibly valuable nursery like Once Upon A Time is closed at the Nottingham College campus in my constituency, as part of a meagre cost-cutting exercise, it’s very disappointing.

“The nursery was incredibly popular – which our campaign against the decision showed – and provided parents in my area, somewhere they were beyond happy to send their children. And I’m sure parents all over the country have shared our disappointment as similar nurseries have closed their doors for the same reasons.”

Are you campaigning to save your council/community-run nursery? Send us your story. Email: marketing@parenta.com