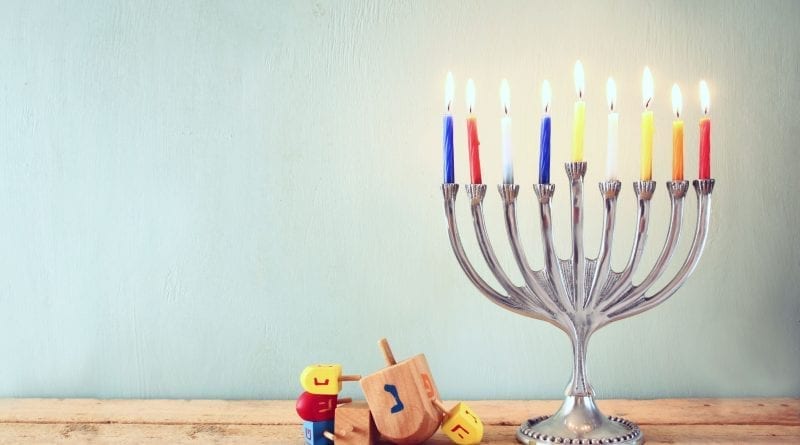 Hanukkah or sometimes spelled ‘Chanukah’, is known as the ‘Festival of Lights’ and is an eight-day Jewish holiday commemorating the rededication of the Holy Temple in Jerusalem (known as the Second Temple). The United Kingdom is estimated to have the 5th largest Jewish population in the world, with just under 300,000 people practicing the Jewish faith in the country.

The Hebrew word ‘Chanukah’ means ‘dedication’, and is pronounced with a guttural, or hard “kh” sound, ‘kha-nu-kah’, not ‘tcha-new-kah’.

The festival is celebrated annually, although like Easter, the dates are not fixed as Hanukkah starts on the 25th day of Kislev according to the Hebrew calendar, which corresponds to dates between late November and late December in the Gregorian calendar. This year, Hanukkah runs from Sunday 2nd December to Monday 10th December.

What does Hanukkah celebrate?

The festival commemorates the victory of a small group of Jews, who rebelled against their Syrian-Greek rulers in the second century (167 BC). After a war lasting 3 years, the Jews, led by Judah the Maccabee, successfully regained control of their temple in Jerusalem which had been destroyed in the fighting.

The group rebuilt the temple, but when the leaders came to light the candles in the menorah (a special 8-branched candelabrum), they found that all the oil had been contaminated and they only had enough for one day.

Despite this, they lit the menorah which then miraculously lasted for 8 days, giving the Jewish leaders enough time to create more oil under conditions of ritual purity.
To commemorate and publicise the miracles, the Festival of Hanukkah was born.

The most important ritual during Hanukkah, is the daily lighting of a family’s own personal menorah. The menorah consists of eight branches, and a ninth branch, typically placed either above or below the main eight candles, that is known as the ‘shamash’ or ‘attendant’ candle.

On the first night, usually just after sundown, the shamash is used to light one candle on the candelabrum. On the second night, the shamash is used to light two candles, and each night sees another candle added into the ritual until all 9 candles are lit on the final night of celebration. It is usual for a special blessing to be read, or a traditional song sung, before and after lighting the menorah.

Traditionally, Hanukkah is a fun time for children, who might be given gifts or Hanukkah money (gelt) in celebration.

There is also a traditional game that children and adults play together which involves spinning a special dice known as a ‘dreidel’, that has letters from the Hebrew alphabet on each of the four sides. These are “nun”, “gimmel”, ”hey” and “shin” – an acronym for “nes gadol hayah sham” meaning “a great miracle happened there”.

Depending on how the dreidel lands, determines if the player receives or gives up a coin, nut or other token.

Gimmel = you get the whole pot

Hey = you take half of the pot

Shin = you put a coin into the pot

The game is played to remind families of their history under Greek-Syrian rule, when practicing the Jewish faith was outlawed. Many Jews continued to practice their religion in secret, but if soldiers came to search a house, the family would bring out the dreidel and pretend to be playing this simple dice game to hide the fact they were really studying the Jewish holy book, the Torah.

There is also a catchy little song called “I have a little dreidel” that children often sing whilst playing the game too.

As the Hanukkah miracle involved oil, it is traditional to eat foods at this time that are fried in oil. Examples of Hanukkah foods include a potato ‘latke’ or pancake, garnished with apple sauce or sour cream, or a jam-filled doughnut called a ‘sufganya’.

Ways to celebrate or reflect on Hanukkah in your setting

There are many ways to celebrate Hanukkah in your nursery including:

One of the main things that Hanukkah represents to Jewish families, is the ability to celebrate and practice their own faith in their own way. Promoting tolerance for different religions is part of the “British Values” set out in the Government’s guidance for education in schools which encourages “mutual respect for, and tolerance of, those with different faiths and beliefs and for those without faith.”

By introducing nursery children to different religious stories, festivals and ideas from different faiths at an early age, you can help develop religious tolerance and understanding, as well as having fun learning about different cultures too.

For some free resources on Hanukkah including songs, crafts and information on how to play dreidel, see here.