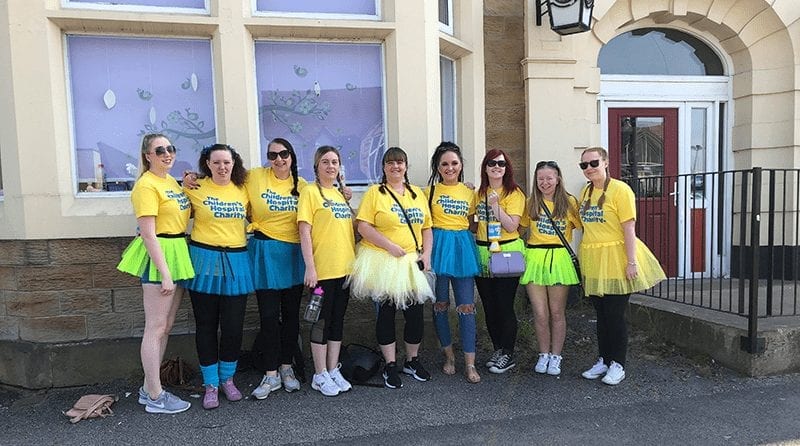 Staff from Highgate Day Nursery in Sheffield took part in a sponsored walk from Highgate to Sheffield Children’s Hospital and back. They wore Sheffield Children’s Hospital t-shirts and bright yellow and blue tutus to attract attention. Everywhere was really busy as it was the day of the royal wedding and lots of people spotted them, kindly donating in the buckets they carried. The walk was even more of a challenge as it was a very hot day in the middle of a heatwave!

In addition, the nursery took part in a sponsored walk with all the children within the setting. Babies and toddlers explored the garden in a ‘bug hunt’ while the pre-school children went for a walk around our local area. They also raised more money by encouraging parents to bake for their cake sale.

In total, £1430.28 was raised which was enough money to receive a medium sized ‘snowflake’ for the schools snowflake project at Sheffield Children’s Hospital and the staff were invited to a light switch-on event, where they watched a presentation about where the money had been spent. The event was attended by BBC Look North who aired the event live on TV!

Highgate Day Nursery in Sheffield is part of Early Years Care & Education Ltd which has four settings in Sheffield.  The hospital is Sheffield Children’s hospital. Kelly James at Highgate instigated most of the fundraising activities.  She said; “We are all so proud of all our staff and children at the nursery and the effort they have put into their fundraising”.