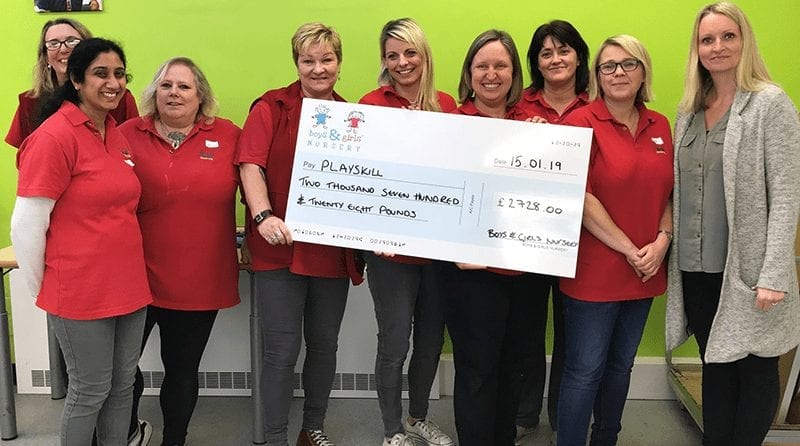 Boys & Girls Nursery were thrilled to fundraise for Playskill – their chosen charity for 2018. Playskill is a local charity that runs parent and child term-time groups for pre-school children with special physical needs in Watford and Hemel Hempstead.  Playskill are run by a skilled team, including a Paediatric Physiotherapist, Occupational Therapist and Speech and Language Therapist and they rely on grants and donations in order to keep their much-needed services running.

Throughout 2018 the Boys & Girls Nursery team hosted many fundraising events within each of their nurseries in Croxley Green, Rickmansworth, Stanmore and Watford.  From delicious bake sales, cosy PJ days and a charity day, to raffling off fabulous festive hampers which were created with the help of local companies and nursery parents. Between the team, the children and the parents over £2728 was raised, an amazing amount that will help support the services that Playskill offer.

Andrea Clarke, Director, Playskill, said “We are simply thrilled to have this amazing local community support for our pre-school children with physical difficulty or delay from Boys & Girls Nursery!”

Natasha Kirby, Director, Boys & Girls Nursery, proudly said “Our team have worked really hard to put on a variety of fundraising events throughout the year. We had a great year supporting Playskill and I would like to thank everyone who donated money or items to help us reach a fantastic sum of £2728”.