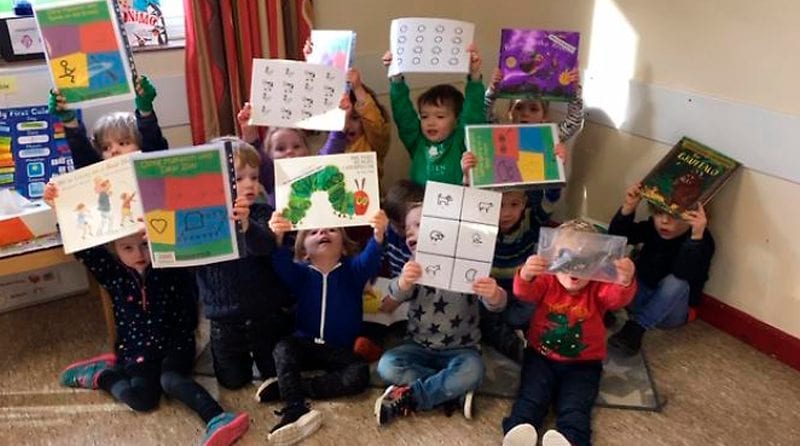 Beenham Pre-school received ‘Makaton Friendly’ status from the National Makaton Charity in January 2018 after the pre-school started Makaton lessons for toddlers on a monthly basis. A year on, they have been celebrating the occasion with a birthday cake.

Paula Read, the manager of the pre-school, said that the Makaton language programme has “empowered” the children and staff at Beenham Pre-school, when speaking to Newbury Today.

Makaton uses signs and symbols to help people who have cognitive and language impairments communicate.

Beenham Pre-school has no children with special needs, but the manager believed that learning Makaton can be beneficial for anyone.

The lessons began with help from Lesley Bungay, who teaches the programme at the school. Mrs Read praised Lesley Bungay, stating that she was “so supportive” with her own training, as well as the other staff.

The pre-school also received a video message from Mr Tumble, who is the star of the TV programme, Something Special, which introduces children to Makaton signing.

Mrs Read said to Newbury Today: “The staff are more confident in their ability.

“Makaton is not designed to take the place of the speaking but to enhance it.

“It definitely encourages the children’s confidence too.

“For those who are shy to stand up and speak, having a sign for something they wish to say, will encourage them to get up and do it.”

The pre-school also invites parents for regular taster sessions to show them the benefits of the lessons.

Mrs Read added: “The children are even teaching their parents too. That doesn’t happen very often in early years. It’s really empowering.”

Beenham Pre-school is the only mainstream Makaton-Friendly-accredited childcare setting in Berkshire.