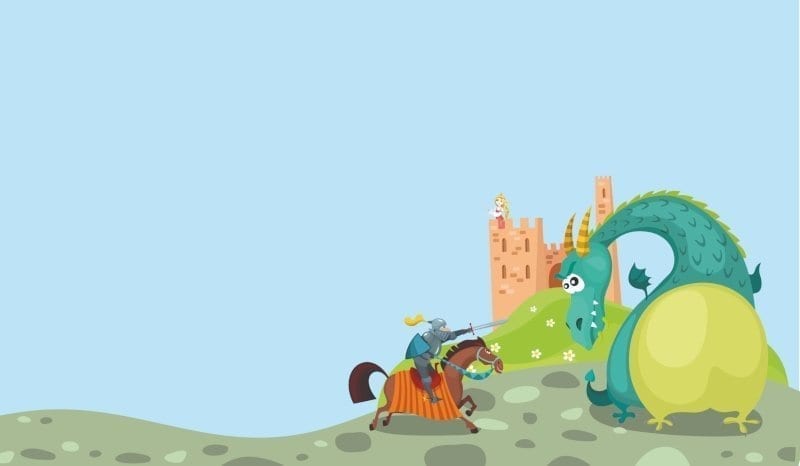 On Tuesday 23rd April, England will celebrate their Patron Saint Day and the heroic figure of St George will be remembered up and down the country. Flags bearing the familiar red cross on a white background, will be flown from many a windowsill or car bonnet, and children up and down the land will remember the story of the brave knight who rescued a ‘damsel in distress’ from a fiery dragon.

But what do we know about the real St George? Is there more to his story than meets the eye and how can you celebrate this day in your setting?

Who was the real Saint George?

Interestingly, Saint George was not English as many people may assume. In truth, he probably never even set foot in the UK at all. Yet George does have a complex and multicultural heritage, which perhaps explains why he is not only the patron saint of England but of many other countries including Bulgaria, Palestine, Ethiopia, Greece and Lithuania too.

Most historians now think that George was born in Cappadocia (modern day Turkey) to a Greek family in around 280 AD. His early life is still largely unknown, but he became a high-ranking Roman soldier at a time when, unfortunately for George, the Emperor Diocletian was cracking down on the growing influence of the early Christians. George was famed for his illustrious courage in battle, but when he refused to denounce his faith, he was tortured and killed, aged just 23.
His famed courage and stoicism in the face of persecution, meant that he was later canonised (made a saint) in AD 494 by Pope Gelasius, and a feast day has been celebrated in England for hundreds of years. He has even been immortalised by Shakespeare in “Henry V”, when rallying the troops before the Battle of Agincourt in 1415, he says “Cry God for Harry, England, and St George”.

So what about the dragon?

As most discerning adults know, there are no real ‘dragons’ in the world today, (but shh, don’t tell the children!) And as far as evidence shows, there were no real dragons in St George’s time either. However, that never stopped a good story – especially if you are trying to make a moral point or emphasise the bravery of your heroes.

Thus, the story of the Christian martyr, St George, killing the dragon and saving an innocent girl, started appearing in medieval times as an allegory for Christianity overcoming the devil, since the devil was often represented by a snake or a dragon. It was most likely brought back to the UK and Europe by the Christian crusaders of the 10th and 11th centuries.

In reality, St George would probably have benefitted greatly from a higher degree of tolerance and multiculturalism that we promote in pre-schools and educational establishments today, and that is why St George can be seen as a good symbol to promote British Values, tolerance of, and respect for other people’s religions and beliefs.

So how can you celebrate St George’s Day in your setting? Here are a few ideas which tie in with both his real-life history and the myths surrounding St George too.

Use the story of St George to promote the values of tolerance and acceptance by sharing the real history of the man, explaining that it is important to respect and tolerate other people’s ideas, beliefs and religions, even if they are different from your own.

You could create a map or display showing where George was born (Turkey), where he lived in Palestine as a Roman tribune, and where he is buried in the city of Lod in Israel. You could also then link this to some of the countries that have St George as their patron saint to show how far his fame has reached.

There are two famous paintings of St George dating from the early 15th century, which you could use to inspire the young artists in your settings. One image is by Uccello and another by Raphael, but they both depict a knight-like St George vanquishing the dragon. Ask your children to draw some knights and dragons on paper or make a collage using tin foil to show his shining armour.

Why not make and decorate some St George’s Day biscuits and teach the children about different shapes at the same time? Use a rectangle for the basic biscuit shape, then cover with white icing, mixing up some red icing to make a red cross across the white background to represent St George’s and the English flag. You could incorporate different shapes for the shield and other flags, such as triangles, too.

We all love to dress up and play act and this is vital to help children develop creativity and understanding in their young minds. You could recycle some old cardboard boxes to make some play shields and swords and allow the children some unstructured play on the theme of knights and dragons!

The English Heritage and National Trust often promote St George’s Day celebrations in many of their sites around the UK. If you don’t want things to cost too much, you could simply go to a local park and hold a pretend ‘joust’; or research some medieval history and just have fun building sand castles!

On the English Heritage website, you can learn how to make a cardboard shield, sword and find some places where you can ‘spot a dragon’ – albeit ones that have been turned to stone! See www.english-heritage.org.uk/visit/whats-on/st-georges-day for more information.