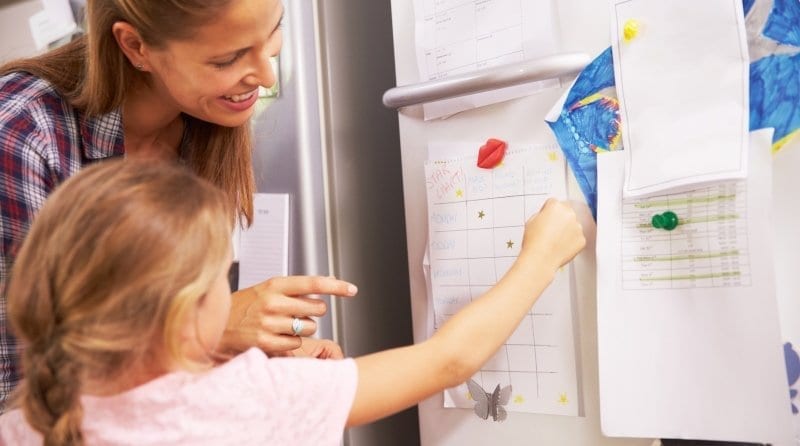 Many early years providers choose to use reward charts as a way of promoting positive behaviour in a child. When used well, these are a fantastic tool for helping a child to change a particular behaviour. Unfortunately, though, they are often used in ways that are not clear for the child and that don’t encourage a child to achieve. Here are some factors to bear in mind when designing a reward chart.

Pick your battles. - if you could change one behaviour what would it be? Focus on this one behaviour only. Once things have improved you can always tackle a different behaviour (using the same chart if you like).

Be specific. Don’t rely on expressions such as ‘be good’. This is one of the most common mistakes I see when parents use a reward chart at home. Telling a child their chart is for ‘being good’ doesn’t work. Why? Because ‘good’ is subjective and is far too broad for a child to understand. What one person considers to be good may not be the same as someone else’s standards. Furthermore, if you tell a child their reward chart is for ‘being good’ and they don’t achieve it, then they come away believing they have been… bad. This isn’t going to boost their self esteem or help them want to strive to achieve next time. Instead, tell the child exactly what it is that you want them to do e.g. sit down at carpet time, use kind words, or for use at home it might be ‘stay in my bed all night’.

Use positive wording, e.g. ‘ I can use gentle hands’ rather than ‘I will not hit’. Don’t remind the child of the behaviour that you don’t want to see. If you tell a child ‘don’t run’ then the last word they hear is ‘run’ and guess what they are likely to do?! If you try saying ‘walk’ instead they are far more likely to do so. Set them a target that clearly says what they do need to do.

Make it realistic / achievable. The child needs to be able to achieve the reward quite soon after receiving a new chart so that they get to enjoy the value of the reward. If they keep trying and trying but don’t get to experience the reward within about the first week then I would say it is too hard and they are likely to give up. So, let it be easily achievable at first. You can always extend the chart later by increasing the number of times you expect to see the positive behaviour, or the amount of time that they do it for.

Pick a theme, something that the child is interested in – they are far more likely to want to engage with it if is related to a theme that they love. Some great reward charts allow a child to work along a race track, up a space rocket or to collect something like unicorns or characters from a favourite TV show. It doesn’t need to be a work of art – just a simple drawing or printout will be fine.

Let the reward be instant – Once the chart has been achieved, try to make the reward as instant as possible. If a child earns a reward on Monday but then doesn’t get it until Friday then the novelty will have worn off, plus things could go wrong between Monday and Friday and you may feel that by Friday you are rewarding negative behaviour. You may also lose the trust / interest of the child if they don’t get the expected reward when they have earned it.

Make it positive – create a chart whereby the child starts at the bottom of a chart and works towards their target. Don’t start with, for example, 10 stars and then take them away if the child does something wrong. That way things can only go downhill. So, for example, a child might earn a character on their chart each time they go for part of the day using gentle hands.

Stay calm - don’t react / tell a child off if they don’t achieve their chart. Show the child that you believe that they can do it. The idea of a reward chart is that receiving or not receiving the reward is enough for the child. If they really want the reward that badly and don’t achieve it then that is going to be enough of a disappointment for them. Don’t tell them off, just calmly remind them that they can have try again tomorrow.

Keep it visual – make sure the child can see how well they are doing and what more they need to do to achieve their reward. This will really help them understand that changing this behaviour is worth it! If things start to go wrong you can show them the chart to give them an incentive to stay on track.

You will notice that most of the advice here relates to a reward chart for one child. This is because, for the chart to be most effective, it needs to be specific to the needs and interests of that child. Whilst some whole group reward charts can be useful, if you are tackling a particular behaviour then a child is likely to need their own chart. If you need any support coming up with a reward chart then please feel free to email me – we can put our heads together and see what we can come up with. Good luck!

Gina Smith is an experienced teacher with experience of teaching in both mainstream and special education. She is the creator of ‘Create Visual Aids’ – a business that provides both homes and education settings with bespoke visual resources. Gina recognises the fact that no two children are the same and therefore individuals are likely to need different resources. Create Visual Aids is dedicated to making visual symbols exactly how the individual needs them.