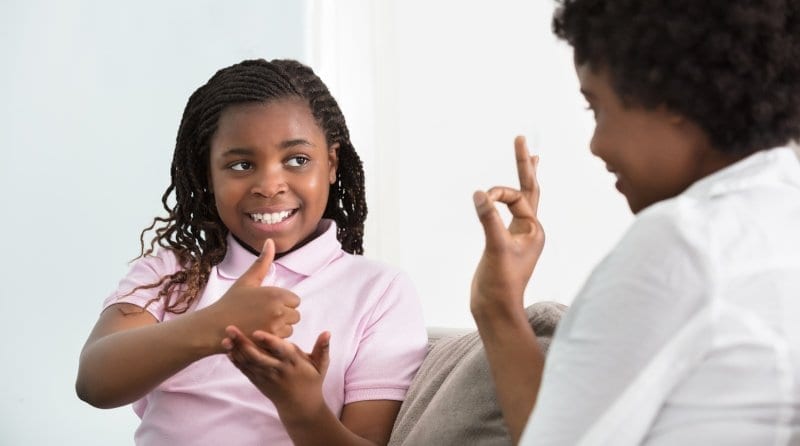 In the UK, it is estimated that 1 in 6 people (approximately 11 million people) are deaf or hard of hearing. Deafness is the third most common disability in the world, but you would be hard-pressed to spot a deaf person in a crowd.

Most deaf people do not see their deafness as a disability or even a problem that needs to be solved. They just view it as part of the normal life experience that they share with others in the deaf community and with their family and friends.

From 6th – 12th May, the UK Council on Deafness (UKCoD) will co-ordinate Deaf Awareness Week (DAW) to highlight problems that deaf people face in their life, work, education and leisure. Many organisations and charities get involved in events, fund-raising activities and education to bring the message to others. There is a lot of free material on their website including bunting, posters and educational materials, but read on to find out more.

Deaf Awareness Week was originally run in October by the British Deaf Association (BDA) and its main focus was on promoting British Sign Language (BSL) and the people in that community. As more and more organisations and groups wanted to get involved and draw attention to more general deafness topics, in 2001, the October week name was changed to Sign Language Week, and the mantle of organising Deaf Awareness Week passed to the UKCoD, who subsequently set the week in May, so as not to conflict with the BDA’s work.

Nowadays, Deaf Awareness Week is a platform to discuss and raise awareness of many general issues related to deafness, and countless organisations get involved both locally and nationally to bring more understanding of deafness, and positive change to their own communities.

The theme for this year’s DAW is “Celebrating Role Models” and it’s hoped that organisations will publish their own role models (deaf and hearing) using the hashtag #DAWrolemodels2019 on social media during the week to raise awareness.

One on the main issues for both people in the deaf community and those who are not, is the problem of communication. Many hearing people might wrongly assume that deaf people will not be able to understand them and there are still many misconceptions about the abilities of deaf people which need addressing.

The National Deaf Children’s Society has lots of useful information about this and emphasises the need to understand that all deaf people have different levels of deafness, hearing aids, implants or technology as well as their own preferred method of communication. It has published the following tips on communicating with deaf people, but especially with children.

Never give up or say “I’ll tell you later”. This is a deaf child’s ‘pet hate’. They want to be involved, not left out. Try alternative methods: texting, emailing or using a pen and paper.

British Sign Language is used by an estimated 125,000 deaf adults in the UK, plus 20,000 children. It is not just a matter of adding gestures to replace words but is a language in its own right, with its own vocabulary and grammar. It also differs from American Sign Language and Makaton Signing and is the preferred language of many deaf people, so learning BSL is one thing you could do to help your communication with deaf people.

How to get involved in DAW