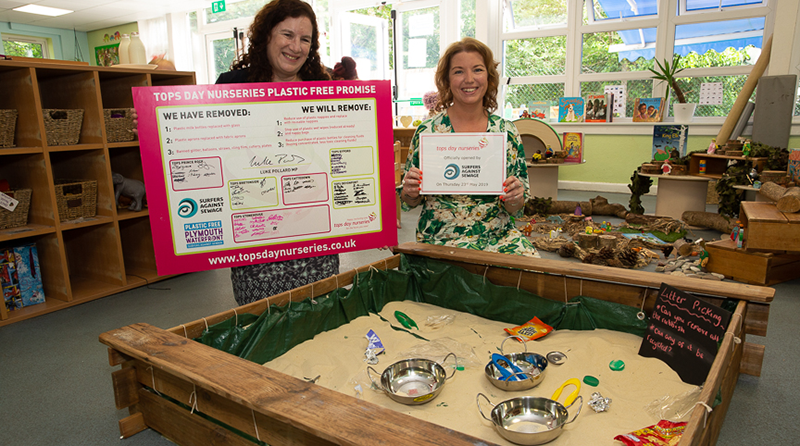 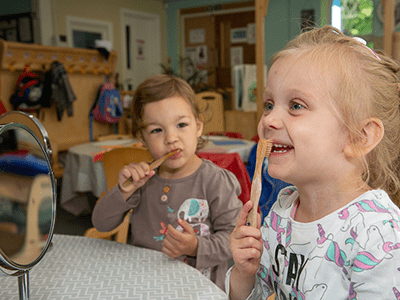 Tops Day Nurseries in Plymouth recently celebrated an official open day with Claire Bradford, a Regional Rep for Plymouth from the nationally recognised Surfers Against Sewage.

Due to Tops Day Nurseries being one of the UK’s most eco sustainable family of day nurseries, Claire from Surfers Against Sewage was supportive of the open day and unveiled an opening plaque which is proudly displayed outside of Tops Efford and Tops Bretonside.

Tops Efford, based at Dell Children’s Centre boasts a large, secure garden which the children took great pride in showing off to their special visitor, whilst showing Claire all of their new natural resources. Inside the children demonstrated their knowledge of how to protect the environment by taking part in a litter picking activity as well as saving marine animals in a water tray by using nets to fish out plastic pollution.

At Tops Bretonside, which is located near the heart of Plymouth, Claire was impressed with a “Don’t throw it, show” it eco display board and the opportunity for children to explore nature through their well utilised garden and mud kitchen. Claire was also shown the bamboo toothbrushes used but across the Tops family and learnt more about the Real Nappy campaign, a campaign backed by a charity called GECCO.

“With almost 1000 schools and nurseries across the UK joining our Plastic Free Schools movement we get to see and hear many wonderful stories of positive, pupil-led campaigning. However every now and then a story like this stands out!

Surfers Against Sewage would like to thank and celebrate the students and staff of Tops Day Nurseries for their ‘above and beyond’ work to free where they learn from single-use plastics and inspiring others to do the same. We can’t wait to see the Plastic Free plaques too!” – Dom Ferris, Education Manager, Surfers Against Sewage