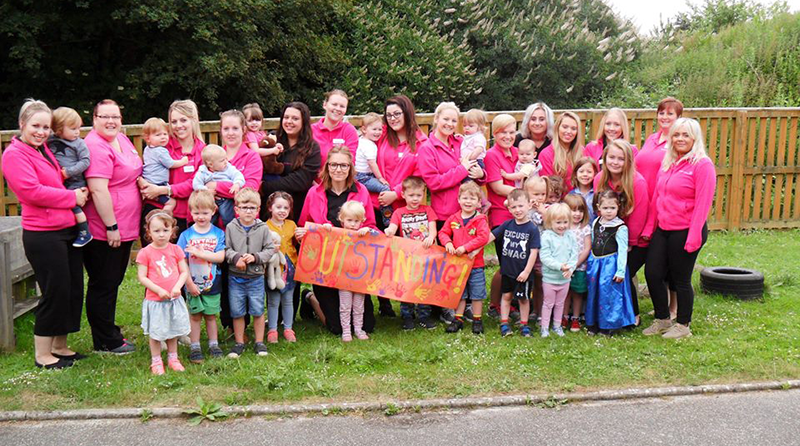 Tops Day Nurseries based at the Isle of Wight College in Newport were delighted to have gained an accolade announcing them as the South’s Nursery of the Year 2019.

The very best of the nursery sector was celebrated with a night of accolades at the National Day Nurseries Association Nursery Awards in June this year, presenting a number of awards to colleagues in the childcare sector from across the country.

The NDNA’s prestigious nursery awards acknowledge, reward and celebrate excellence across the nursery sector, highlighting the fantastic work of nurseries and practitioners in supporting over one million children and their families.

Tops Day Nurseries based at the Isle of Wight College in Newport were delighted to have gained an accolade announcing them as the South’s Nursery of the Year 2019.

Hannah Jennings, Nursery Manager commented “I am so proud of my team, they are all amazing! Being awarded the title of Nursery of the Year South is such a privilege and we are all delighted to have been recognised for all of our hard work.”

Tops Newport will be continuing the celebrations during a garden party open evening on 9th September, where local businesses and families within the community can look around the Ofsted Outstanding, award winning nursery.

Cheryl Hadland, Founder and Managing Director of Tops Day Nurseries said “Our Newport nursery are a credit to the Tops Day Nurseries family. From becoming Ofsted Outstanding, Daynurseries.co.uk’s Most Recommended Nursery in the South and now NDNA’s Nursery of the Year South, the Team at Tops Newport have gone from strength to strength whilst giving children of all ages the best possible care.”

Tops Newport’s Garden Party will be held on Monday 9th September from 5pm. Visitors can take a wander around the outstanding nursery, view the Tops Forest School yurt and learn more about the new, upcoming expansion plans for the setting.