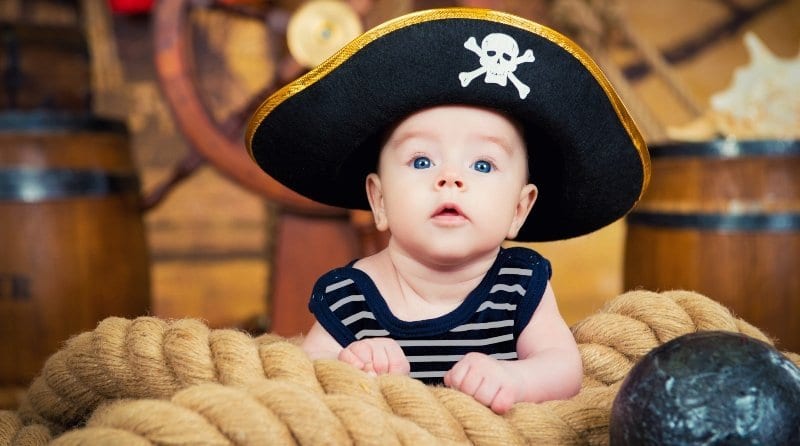 Last month, we celebrated National Playday and National Colouring Book Day, and earlier in the year was International Women’s Day and Safer Internet Day. So, I know you’ll all be wondering about this month’s awareness day. There’s lots of fun to be had with Roald Dahl Day, (see page 30) but I bet you didn’t know that on September 19th, you can practice your old pirate patter with International Talk Like A Pirate Day!!

(OK, back to speaking normally - for a few paragraphs at least!)

So, it’s true – September 19th is officially recognised as International Talk Like A Pirate Day. It started in 1995 when two friends (Mark “Cap’n Slappy” Summers, and John “Ol’ Chumbucket” Baur) were playing racquetball and began shouting encouragements to each other. These escalated into pirate slang and by the end of the match, they had decided to set up a day to speak in the pirate tongue and keep some traditional piratical activities alive. They chose the 19th of September and this sturdy band of intrepid adventurers (well 2 of them!) dedicated themselves to keeping their new-found parlance. For 7 years they stoically observed the day, when one lucky Monday (or it could have been a Tuesday… pirates don’t count the days you know); they found some scurvy treasure – the email address of the syndicated columnist, Dave Barry – who, with his tongue in his cheek and quill in his hand, promoted the idea across his network. The rest, as they say, is history.

Nowadays, pirates big and small look forward to hoisting their main sails, leaving the landlubbers behind and becoming a swashbuckling buccaneer for the day! There’s even a dedicated website at www.talklikeapirate.com where other would-be scallywags can learn more and download some useful resources such as a pirate glossary, pirate songs, and some learning resources for junior pirates, their parents and teachers. So why not get into the swing of Talk Like A Pirate Day in your own setting, and see what madcap mayhem you can have?

Here are a few ideas to help you

Since the day is all about speaking like a pirate, everyone should at least learn a few pirate phrases. The website has some great ones for adults and little ones alike, but we’ve put down a few of our favourites to help you get started.

Ye - You
Me -  My
Bucko -  Friend
Booty - Treasure
Shiver me timbers - Expressing surprise
Parley - A discussion between opposing sides in an argument
Ahoy - Used to attract attention or as a greeting
Scupper that - Throw that overboard
Davey Jones’ locker - A fictional place at the bottom of the sea - death!

This is a great way to engage the children and to help them with some extra learning and problem-solving opportunities too. You can do it inside and/or outside, depending on the weather and the children can participate individually, in pairs or in teams. Plan your hunt carefully and decide if you want to use a map, or have clues to follow that lead from one to the next. It’s best to start at the end (where your treasure will be hidden) and work backwards towards your designated starting point, either making-up your own clues or you could use some of the many ready-made ones on the internet. There are some simple rhyming couplet ideas here.

If you have very young children, you could do a picture quiz instead of using words, so that children find the items from a picture. And for older children you can introduce an element of maths such as simple counting or addition to get to the answer.

Make sure that you have some ‘treasure’ at the end of the trail. It can be anything and an old shoe box covered in brown paper makes a good treasure chest.

Dress up as a pirate

Red, white and black are common pirate colours so ask children to come to the setting in these colours. You can make some pirate hats and eye patches using cardboard and string and cut up some old pieces of material to make bandanas and arm bands.

A pirate wouldn’t be a pirate without some booty, so why not make some treasure of your own? Cut out different shapes of coloured card to be jewels or string some beads together to make necklaces and bracelets. You can even make and paint some crowns, bars of gold or coins too.

Learn a pirate song and jig

Everyone loves and old sea shanty and this is a great way to increase physical activity and have some fun doing it. The creators of Talk Like A Pirate Day have made up a child-friendly pirate song which is listed on their website along with several other lesson plans for historical, art and other types of educational lessons. You can adapt them depending on the age of the children you are working with.

The skull and crossbones is the traditional pirate flag and you could make some using either paper, cardboard or material. There are 32 free, downloadable stencils here if you don’t want to draw your own.

Read some stories about pirates

Here are some of our favourite pirate books for younger children:

Above all me hearties, tis time to weigh anchor, get all hands on deck and have some piratey fun!