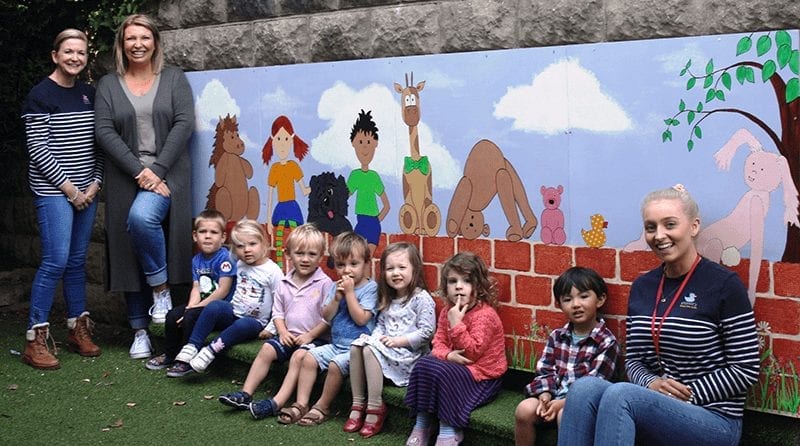 Press release from The Nursery Portishead.

A local artist has created a garden mural for children at a Portishead Nursery.

Children at The Nursery were excited to see characters, created by Tracie Fry, come to life on a metre high mural that has been installed alongside their outdoor play area.

Ruby Rag Doll, Quackers the Duck and Giggling Giraffe are just some of the characters that will also begin to appear on walls inside the nursery and as toys in the playrooms. Nursery owner, Jackie Hardie, even has plans to write and publish adventure and life lesson books involving the loveable characters.

Jackie said: “I adored the characters that Tracie actually created for her children when they were small, as soon as I set eyes on them and asked if we could use them at The Nursery, developing them and adding some new ones to complete a set of characters that the nursery children can become familiar with. These include a dog just like the therapy dog that will soon be regularly attending the nursery. I am so pleased with the result. The children absolutely love the mural and are excited to see where the characters will pop up next.”

Tracie said: “I began painting murals for my children’s bedrooms almost 20 years ago and have since created all sorts of art in all sorts of places, from commissions that hang on the walls of clients’ homes to the baby changing room of a well known retail outlet. I love creating and it’s the best feeling ever when people get pleasure from my work.”