Nursery’s ‘no-toy’ trial to be made permanent 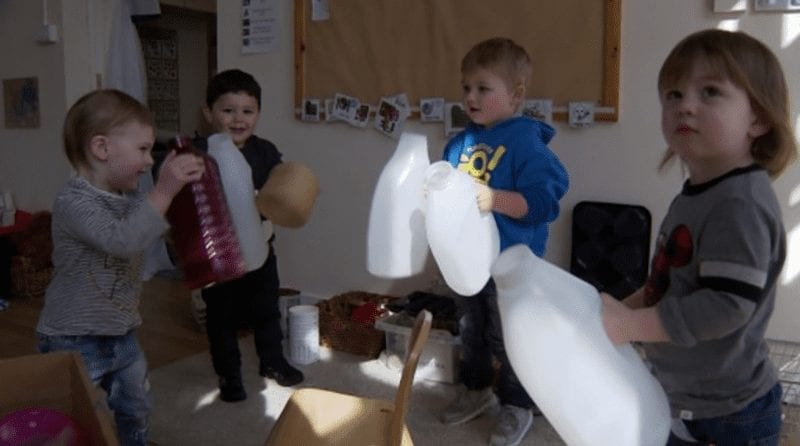 Nursery’s ‘no-toy’ trial to be made permanent

A nursery in Bristol has trialled having no toys for a month in a bid to see what effect it would have on the children.

Ilminster Avenue Nursery School decided to swap traditional toys for everyday items such as cardboard boxes, tins and magnets. The move challenged how the children currently play but had mixed reactions amongst the different age groups.

Head teacher Matt Caldwell said: “Cardboard boxes feature even more than they ever did before and we consider what we’re buying as our resources now and how the children are using them.

“I think the two-year-old group in particular have really embraced all these different objects that aren’t necessarily toys, but children are using them in a creative and imaginative way and their learning is improving.”

Mr Caldwell added: “There were some older children at the end of the month who said we really would like our trains back. Our purpose was never to deprive the children so, of course, they had them back after the month. But the two-year-olds – they don’t want any [of the plastic toys] back at all.”

The inspiration behind the move came from a scheme in Germany which saw nurseries replacing their plastic toys with everyday items such as egg boxes and pine cones.

The nursery school’s head teacher hoped that the project would improve children’s communication and language.

Staff said that, having observed the children during the trial, three-quarters of two-year-olds used more imagination in their play. The change has now become permanent amongst this age group, as the infants do not want their toys back.

Paul Howard-Jones, Professor of Neuroscience and Education at the University of Bristol said: “If this [experiment] is really having that sort of impact, it raises all sorts of really interesting questions for us. What sort of toys, if we do give them toys, do they really need? What are toys for, actually? Who is selling us the toys? Why are we buying them?”