Give us a smile: the importance of oral health and World Smile Day® 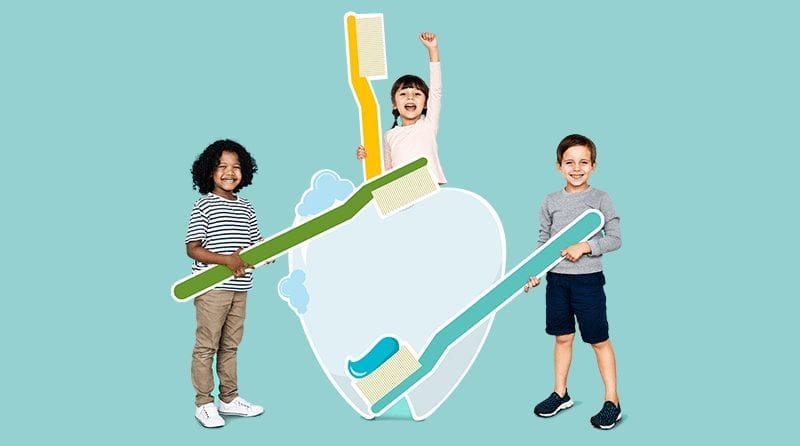 What does it cost to smile? Nothing! And yet a smile can set the world alight, right?

On Friday 4th October, people across the globe will be trying to spread some good cheer, engage in an act of kindness and make each other smile to celebrate World Smile Day® (WSD). So here at Parenta, we thought we would do our bit to spread the love by giving you some advice on putting on your best smile whilst imparting some vital information on oral health at the same time. And we’ve also included some fun ideas on how to join in with WSD and spread miles of smiles on the day itself.

How to have a super smile – look after your teeth!

There’s a wonderful, humorous poem by Pam Ayres called “Oh I wish I’d looked after me teeth” which many parents and nursery workers from Generation X and before, will remember fondly. It’s a cautionary tale about an adult regretting their childhood lack of concern for their teeth, resulting in them watching their false ones “foam in the water beneath!”

Oral hygiene and oral health are intricately linked. Tooth decay in children, that had been declining for decades, has recently started to creep up again, with the blame focusing on the high sugar content of much of the food and drink that children consume. In 2016–17, hospitals in England extracted multiple teeth from children and teenagers a total of 42,911 times according to statistics obtained by the Local Government Association1. These figures are up by 17% from 2012–13, and the NHS is trying to tackle the problem amid reports that the majority of tooth decay in under-6-year-olds is untreated2.

Although records also show that just under a quarter of 5-year-olds in England had tooth decay in 2017, there are regional differences, and children from the most deprived areas have almost twice the rate of decay as those from the least deprived areas3.

Faced with these alarming statistics, it’s our duty as nursery professionals to help educate parents and children about the importance of good oral hygiene and health, and to encourage best practice along the way.

The main steps to good oral health are:

Brush teeth twice a day for at least 2 minutes. For children under 3, it is recommended to use a smear of an appropriate, age-related children’s fluoride toothpaste containing no less than 1,000ppm of fluoride, or a family toothpaste containing between 1,350ppm and 1,500ppm fluoride. For children aged 3–6, use a pea-sized blob of a similar toothpaste. Parents or carers should brush their child’s teeth (under 3s) or supervise toothbrushing for older children. There are many fun toothbrushes on the market so allow your children to choose their favourite.

Reduce sugar intake and use a straw when drinking sugary drinks which helps to bypass teeth. Sugary foods include:

Visit the dentist regularly – most children need to have a check-up twice a year, although you should follow your dentist’s advice depending on the needs of the child. Try to make the visits fun and be patient if children are nervous.

Fissure sealants and fluoride varnish treatments can help prevent tooth decay. Fissure sealants involve covering the back teeth with a thin plastic coating to prevent food and germs getting into the grooves, and can last between 5 and 10 years. The NHS recommend fluoride varnish is offered to children over 3, and should be given to all those over 3 at risk of tooth decay. It is painted onto the teeth twice a year by a dentist.

More information is available from the NHS and other online sources. We’ve listed some relevant websites at the end of this article. Remember too that dental treatment for all children under 18 is free and the time and effort dedicated to oral health will pay off in the end.

Having embraced the need for good oral health, you’re all set to show your smile to the world!