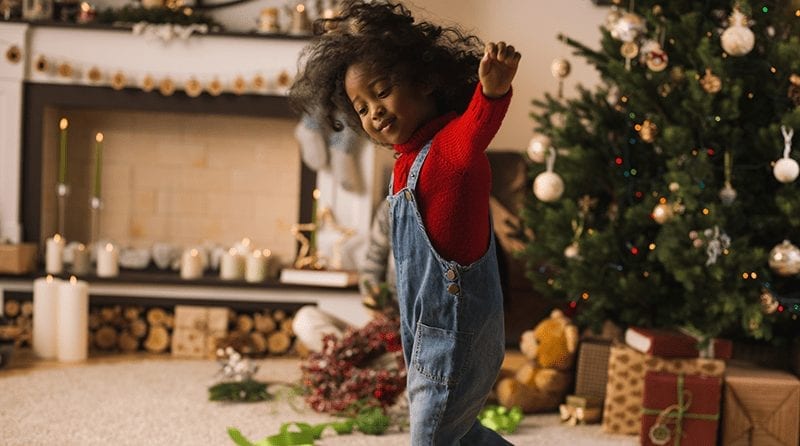 Christmas is coming and families around the world are getting ready to celebrate the Christian festival marking the birth of Jesus, approximately 2,000 years ago. Over the centuries, different Christmas traditions have developed in response to cultures, circumstances and ideas, so read on to find out more.

The spirit of giving

According to Christians, the greatest act of giving was that of God, who gave his only son, Jesus Christ, to the world at Christmas; so that, according to the bible, “whoever believes in him shall not perish but have eternal life.”

Since Christians are celebrating Jesus’ birthday at Christmas, presents are traditionally given to mark this. In the gospel of Matthew, three wise men or Magi, visited Jesus in the stable when he was a baby, bringing him gifts of gold, frankincense and myrrh, so our Christmas presents derive from this act of kindness and worship.

However, whilst this could be said to have started our Christmas present tradition, many pagan rituals held annually years before the birth of Christ, had a tradition of feasting at the winter solstice (called Yule) to celebrate the birth of a new year, and the exchanging of presents was common there too.

Father Christmas or Santa Claus is based on the real-life figure of St Nicholas of Myra who was an early fourth-century Christian saint, well-known for his deeds of kindness and for secretively giving money to the poor. St Nicholas’ Day is celebrated in many countries on December 6th and children often leave out their shoes in the hope of receiving a present from him.

Over the years, and especially during the 19th century, Saint Nicholas’ bishop’s robes transformed into the now familiar red suit with a white, fur-trim; and his persona into that of a rather rotund and jolly, elderly gentleman. This idea was further enhanced by successful 1930s Coca-Cola adverts, which promoted and standardised this image of Father Christmas over many years in the 20th century. Whatever he looks like, the idea that he enters and leaves by the chimney, gives presents to ‘good’ children at Christmas, and likes a mince pie or two, is an enduring one.

In many places around the world, evergreen trees have been used in mid-winter to decorate houses, ward off evil spirits and remind people that spring will soon return. The Romans used fir trees even before Christianity, so it’s no surprise that as the religion grew, the tradition of decorating a ‘Christmas tree’ developed out of this ancient custom. It is thought that the Germans were the first to bring whole trees indoors and attach candles, edible treats and glass decorations to their branches. However, it was not until the 1830s that Christmas trees were introduced in Britain, and in 1841, Prince Albert set up a tree in Windsor Castle. After an 1846 sketch showing the Royal family standing around their Christmas tree was published and circulated, every household in the country wanted one. Nowadays, between 6 and 8 million real Christmas trees are sold in Britain every year.
As a token of their appreciation for Britain’s help to Norway during the Second World War, the city of Oslo has sent an annual gift of a 20ft Norway Spruce tree to stand proudly in Trafalgar Square each year since 1947. There is a tree lighting ceremony on the first Thursday in December, attended by thousands of people.

The Victorian era was also responsible for promoting the sending of Christmas cards to mark the season, and nowadays, charity Christmas cards raise millions each year for good causes.

The weeks immediately before Christmas are known as Advent, beginning on the fourth Sunday before Christmas and ending on Christmas Eve. In Latin, Advent means ‘coming’ so during this time, Christians prepare for the coming of Jesus and remember the true meaning of Christmas - a reminder to love everyone - amidst all the commercial preparations, visits to Santa and pre-Christmas sales!

It is thought that advent started as early as 567 A.D. when some Christian monks were ordered to fast during December in the run-up to Christmas. Today, some Orthodox religions fast for 40 days, starting in November. Many churches use 4 advent candles to count down the weeks, lighting one candle each Sunday until Christmas Day.

Today, a popular way to count the days until Christmas, is by using a paper advent calendar consisting of 24 or 25 small windows, one to be opened each day in December. A variation of this, which has become popular in the last 30 years, is to have chocolate behind each door rather than a small message.

The 12 days of Christmas

We all know the song…well, at least up to the seven swans-a-swimming part, and then it can get a bit ropey towards the end as we wonder if the pipers come before the drums or the leaping lords are before or after the dancing ladies! Despite this, the 12 days immediately after Christmas are an integral part of Christmas celebrations in many countries. These days mark the 12 days between the birth of Christ and the coming of the Magi, which was on Epiphany or Three Kings’ Day, now the 6th of January. Whether you are given a myriad of poultry and enough people to populate a small hamlet or not, most people use this time to see friends, relax and visit extended family. In some countries, like Spain, presents are not given until 6th January.

In the UK however, Twelfth Night marks the end of the Christmas celebrations, and most people take down all their Christmas decorations by this date. Legend has it, that you will receive a year’s bad luck if you don’t, so better be careful if you want to avoid upsetting your year ahead!

Whatever you do at Christmas, it is a time for spreading love, bringing joy and giving – and the best gifts are often impossible to wrap, those that involve giving your time and your love.