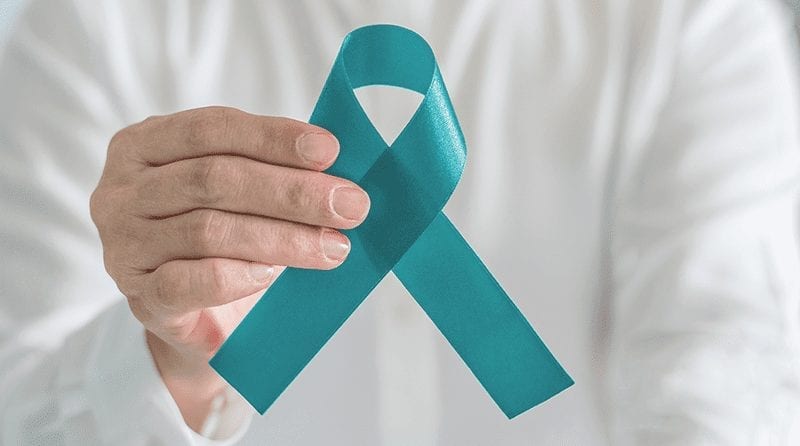 Cervical cancer is not something that many people talk about, yet around 3,200 women (9 people per day) are diagnosed with the disease in the UK every year1. Whilst incidence rates have been falling since the early 1990s, in the last decade, rates have increased again by around 4%, especially in the 25–29-years age group. Sixty-three percent of those diagnosed will survive for 10 years or more, but there are still 852 deaths per year and since 99.8% of cervical cancers are preventable, many women are dying unnecessarily1.

January 20th to 26th is Cervical Cancer Prevention Week, when leading cancer and healthcare charities come together to raise awareness of the disease and how people can reduce their risk. This means:

Nurseries and pre-schools are ideally placed to spread the word to those who could potentially be most affected, and to help save lives, due to the predominantly female workforce and regular contacts with young women.

What is cervical cancer and what causes it?

The cervix (neck of the womb) is part of the female reproductive system and is the lower entrance of the womb, leading to/from the vagina. The cervix is a strong muscle that allows the flow of menstrual blood from the uterus into the vagina, and during intercourse, directs sperms into the uterus. Normally, the entrance is very narrow, but during labour, it dilates to allow for birth.

The cervix has several layers, and the area most likely to become cancerous (the area around the opening) is known as the transformation zone.

The main cause of cervical cancer is a persistent infection of the human papilloma virus, known as HPV, which is a common virus, usually cleared by the immune system. In some cases, the virus causes changes to the cells in the cervix which can become cancerous if left untreated.

Who is most at risk?

Younger women, especially those in their 20s, are most at risk although trans men can also develop it if they haven’t had a total hysterectomy.

What is cervical screening? (smear test)

The National Health Service Cervical Screening Programme (NHSCSP) was introduced in the 1980s. All women and people with a cervix, aged between  25 and 64 should be invited into the programme by letter. The time between screenings will depend on age and any previous abnormal tests.

A ‘smear test’ takes about 10 minutes and involves taking a small sample of cells from the cervix which are then tested to see if there have been changes. Results are usually received within 2 weeks, by letter. If abnormal changes are found, then further investigation and monitoring will be undertaken to help prevent any changes developing into cervical cancer. 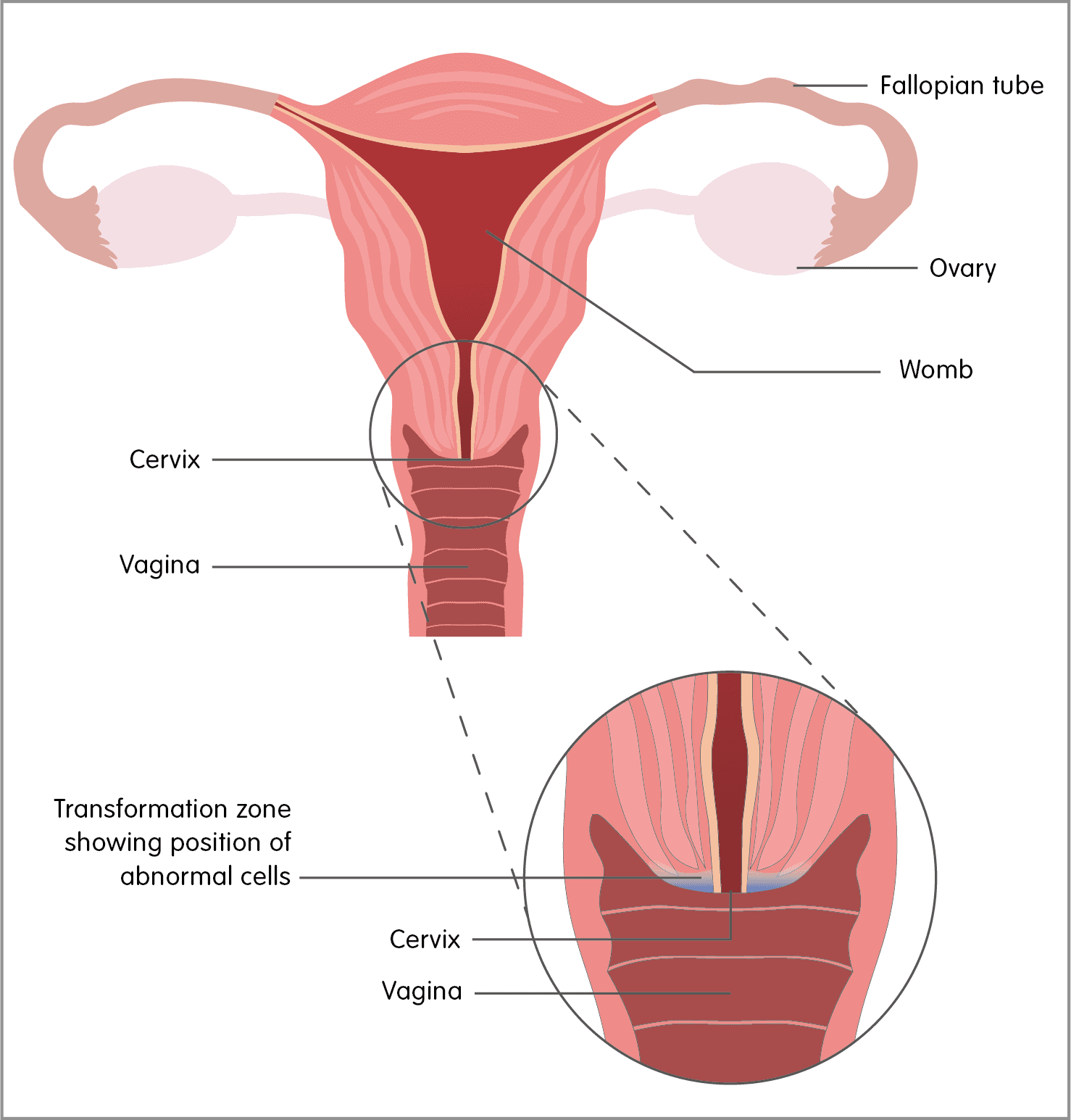 Why are women still not being diagnosed?

One of the main reasons women often give as to why they have not had a smear test, is that they are too busy with their work and their family to make time; they often put everyone else’s needs ahead of their own. Smear tests do not take long but delaying one may impact on your ability to receive early investigation and/or treatments, and in some cases, it may be too late. Research by cancer charities has also shown that women do not understand the symptoms of cervical cancer and many find the process embarrassing.

What are the symptoms?

Symptoms are not always obvious and there may be no symptoms until the advanced stages, which is why it is important to take part in the screening programme.

The first symptom is usually abnormal vaginal bleeding, especially during or after sex, between periods or after the menopause. Vaginal bleeding can occur for many reasons so you should visit your GP early if you experience this abnormally. Other symptoms include pain or discomfort during sex, an unpleasant vaginal discharge or a pain in your lower back or pelvis. 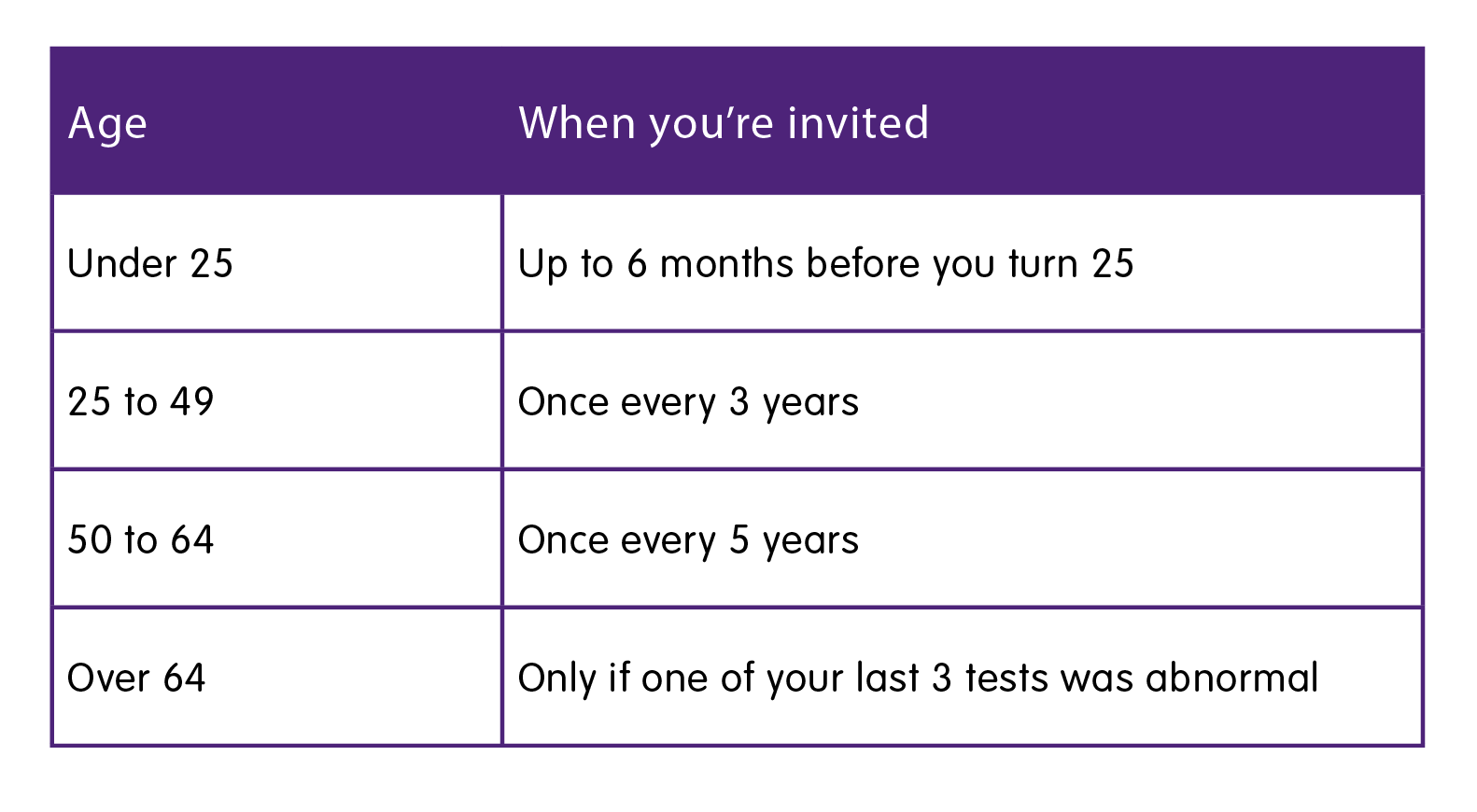 If the cancer spreads to other organs or tissues, then more severe symptoms can be experienced including constipation, weeing or pooing more than normal, severe pain, incontinence, blood in your urine or severe vaginal bleeding. You should see your GP immediately if you experience these symptoms.

There are currently are 3 licensed HPV vaccines in the UK that protect against HPV. They are Gardasil, Cervarix and Gardasil 9. According to the NHS website:

“From September 2019, all 12- and 13-year-olds in school year 8 will be offered on the NHS the human papillomavirus (HPV) vaccine. It helps protect against cancers caused by HPV, including:

A second dose is normally offered 6 to 12 months after the first (in school year 8 or year 9) and it is important to have both doses to be protected. If people miss the first dose, they can still have the first vaccine up to their 25th birthday. Importantly, this is now being offered to boys as well as girls.

There are many ways to get involved and nurseries are well-poised to raise awareness in the target audience. Initiatives should be aimed at the health of your staff and parents rather than children, so why not?: