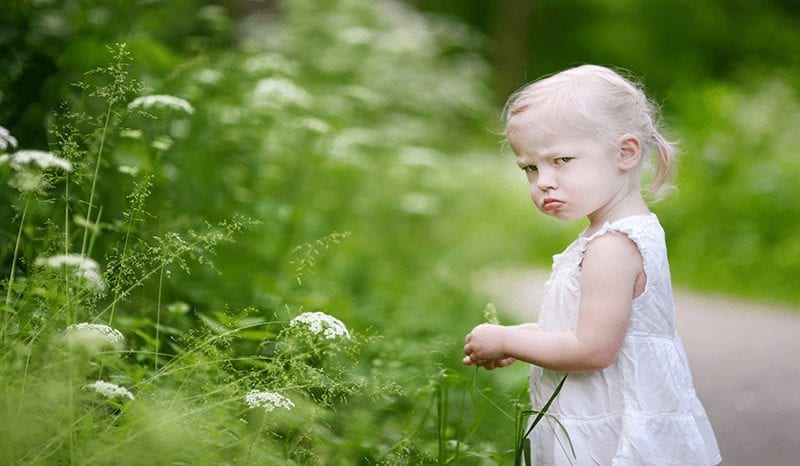 Tantrums can be frustrating. However, it’s important to realise that they are part of a child’s development and a reflection of their struggle to regulate big and overwhelming emotions. A child’s brain is not equipped with the ability to regulate big feelings, therefore when they go into meltdown, children need our help to bring themselves back to a state of calm. If we can see a tantrum as a child struggling, rather than displaying ‘poor’ behaviour, we can then approach these meltdowns from a more understanding and positive angle. Tantrums are inevitable and in my opinion, children shouldn’t be made to feel like they are unacceptable. However, these 3 steps have helped to reduce their frequency and duration with my own children:

A child may seem to be having a meltdown about something that we perceive to be trivial. However, it’s important to remember that problems are relative. What upset us deeply at 15 years old wouldn’t impact us the same way as an adult. As we grow up, we gain more responsibility and our problems get bigger. If we take this idea right down to the age of a toddler, it therefore makes sense that the things that upset them deeply are going to seem tiny through the eyes of an adult. Simply acknowledging the situation that has caused a child’s meltdown, validating their feelings and telling them that their reaction is okay can make a huge difference. It probably won’t stop the tantrum because once a child loses it, quite often they aren’t capable of bringing themselves back. However, knowing that you are there to support them will make them feel safe and will help them to come around a lot quicker.

Facing a tantrum with anger will only ever make it worse. A child’s behaviour might not have been acceptable leading up to their meltdown and that can be addressed later. However, at the time that a child loses it, they are incapable of even hearing what you say to them. Their emotional brain has taken over and their ability to think or talk is usually lost. At this point, regardless of the behaviour leading up to this, they need our help to regulate. It is only then that you will be able to talk through their actions and get the opportunity to teach them a better way. When a child is acting chaotically, they need us to share our calm. Joining the chaos will do nothing but escalate the situation. If we want children to deal with things in life in a balanced way, we need to model this with our own actions. This doesn’t mean that a child always gets their own way though! We can set and teach boundaries whilst still supporting them through their emotions.

An example of this was when my daughter was just 2 years old. She had the ability to dart off, so going into places like supermarkets was difficult because I thought I might lose her. One day, I told her that I needed to keep her safe so she had to choose whether she wanted to hold my hand or to wear a little backpack that I could hold. She didn’t like either of these options and went into complete meltdown. Now in this moment, it can be hard for parents because it all feels very much out of control (plus you get glared at by passers-by which adds more pressure!) There’s the tendency to think that a tantrum is ‘bad’ behaviour and that she just wanted her own way. The truth is that she did want her own way, but rather than get angry, I tried to understand the situation from her perspective. The reality is that she just wanted to be free to run around in a fun open space and I was stopping her from doing this. She had no concept of safety and to her it was totally unfair. If you think about, it’s totally understandable that she protested! In that moment, I sat on the floor (in the middle of the shopping aisle like you do), held her and told her that I understood why she was cross, but that it was my job as her mummy to keep her safe. I cuddled her as she screamed and just told her that I was there and when she was ready, she could choose what she wanted to do. After a few seconds, she calmed down, wiped her tears, put her hands in the air for me to put on her backpack and we went on our way. Despite supporting her through her meltdown this didn’t mean that my boundaries or expectations were compromised. Had I have met her with anger, it’s likely the meltdown would have gone on a lot longer and she certainly wouldn’t have made the decision herself to put on her bag.

3) Give them time and choice

This brings me to my next point which is to give children time and choices. Nobody likes to feel controlled and children are no different. Quite often we have a schedule and we move from activity to activity based on our own timetable. However, children can struggle with these transitions and ‘rebel’. How many times have we told children it’s lunchtime and they’ve gone into meltdown because they want to keep playing? It can be frustrating, but in reality, how would we feel if we were engrossed in something on our computer and someone just came and switched it off with no warning telling us it was lunchtime? We’d be furious! However, if someone said that lunch was going to be ready in 5 minutes, we’d finish off what we were doing and shut down the computer ourselves. The same applies with children. Quite often they are busy with something important to them and have it whipped away with no warning. I’ve found that by giving my children a 5 - 10 minute warning, it gives them autonomy and makes the process a lot smoother. My children actually negotiate with me and I believe this is good because it teaches them the art of compromise. I’ll say it’s bedtime in 5 minutes and my little boy will say ‘no Mama, 4 minutes’. It makes me giggle because he has no concept of time, but I agree, set a timer on my phone and leave it with him. Nine times out of ten, when the alarm goes off, he brings it to me and I tuck him in bed. If I set a time for my children for something to happen, I quite often also ask them if they are okay with this too. If they say it isn’t (which is often the case), I ask them what they think is fair and we compromise. This gives them ownership of their own actions and teaches them to take responsibility of themselves. On the odd occasion that they do go into meltdown after the set time, I remind them that they agreed this time and said that it was fair, which is often enough to calm them down.

At the end of the day tantrums are unavoidable and are a natural part of a child’s development. Children are just little people that have all of the big emotions that we as adults feel – anger, sadness, fear, frustration – yet they have no ability to process them in a rational way. It can be frustrating, however, if we can try to look at the world through their eyes and approach these meltdowns with calmness and kindness, our children will feel safe and learn the art of
self-regulation a lot sooner.