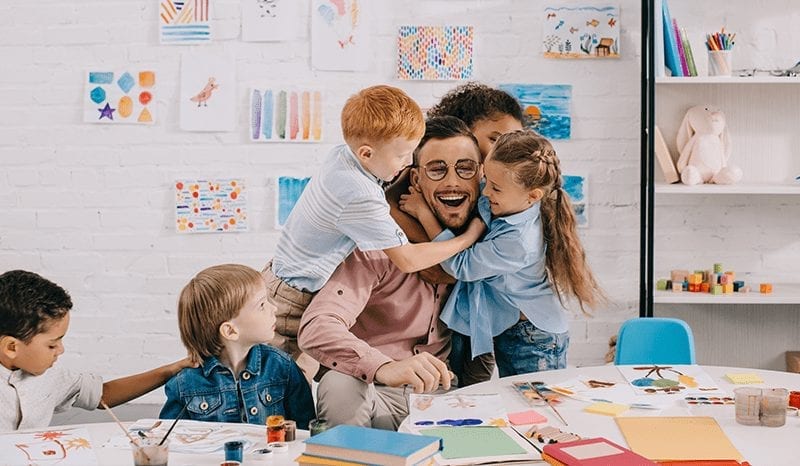 In December 2018, we reported on Wright and Brownhill’s book, entitled “Men in Early Years Settings: Building a Mixed Gender Workforce” which highlighted the problem of the gender imbalance in the early years practitioners. At the time, less than 3% of the early years workforce were male, and despite various initiatives to try to recruit more male staff, the statistics show little improvement so far.

However, that does not mean that nothing has been done, but parliamentary infighting over Brexit (remember that?!), a quick general election and the coronavirus pandemic, have somewhat stalled the progress that might have been made. The problem has not gone away though, and we wanted to revisit the issue to keep it in the minds of recruiters, trainers and owners of early years settings.

It is thought that a lack of male staff is due to a combination of factors such as prevailing attitudes, gender stereotyping and low wages, but the impact is the same – many children are not getting as a balanced an input in their early years as they might. For some children, whose fathers are absent from their home life for example, males working in early years may be that child’s only positive male role model.

In April 2019, the then Children and Families Minister, Nadhim Zahawi, announced a £30,000 grant to support a scheme run by the Fatherhood Institute, as part of a wider funding initiative to develop the general skill level of early years practitioners. The FI grant is to help provide more male role models for children in the early years.

At the time, Nadhim Zahawi said: “Every child needs a role-model to guide them – whether that’s a parent, a close family member or friend, or someone at nursery or pre-school that makes a difference in their life. “The early years staff who support children in the first few years of their education equip them with important skills before they reach the classroom, getting them on track to succeed as they get older.

Just as parenting is a shared responsibility, so is kickstarting a child’s love of learning. I want more men to play a positive role in educating and caring for our next generation. That’s why we’re supporting the Fatherhood Institute to encourage men from all walks of life into early years careers, to give children the best start in life and be a part of this important and rewarding sector.”

The Fatherhood Institute is already providing a number of practical resources such as the ‘MITEY’ (Men In The Early Years) campaign which is run with help from a steering group of academics, employers and practitioners. The MITEY network includes male early years practitioners, supportive female colleagues, managers and owners and others with an interest in gender equality and early child development.

The MITEY website has information, advice and input from existing and new male practitioners including ‘myth busters,’ case studies, and conference information, and acts as a virtual resource to connect like-minded individuals and organisations doing their best to make Britain’s early years education workforce more gender-diverse. They are encouraging everyone to sign up to the MITEY Charter which “sets out a series of statements clarifying signatories’ commitment to working towards a mixed-gender workforce.”

One of its recent publications, “The MITEY Guide To Recruiting Men”, available from their website, is a 20-page guide calling on all early years employers to take an active role in recruiting more men, not only because it doubles the talent pool from which to recruit, but because it begins to breakdown barriers and gender stereotypes, showing that men can be professional caregivers and educators for the early years too. And not just in early years education – there is a gender disparity within general teaching, social care and other caring professions as well.

One thing that the team behind MITEY recognise is that they cannot change things on their own and so they are actively seeking out anyone who can make a difference and contribute to the cause. It might be a careers adviser that challenges preconceptions about early years roles, or a trade union that helps fight discrimination, or an employer who is willing to confront gender bullying within its own establishment. If there are to be more men working in early years, it will take a concerted effort from everyone and MITEY want to hear from you.

Some longer-term research being undertaken by Dr Jo Warin from Lancaster University, in conjunction with The Fatherhood Institute, aims to “improve understanding about the barriers that stand in the way of more men taking up employment in the Early Childhood Education workforce; to learn about possible solutions; and to harness this evidence-based knowledge in ways that can help the UK diversify the gender of its workforce in the most efficient and effective ways possible.”

This research is set to run until the end of January 2021 and its findings and recommendations will be published once collated.

But what can be done now?

Whilst we wait for more research-based recommendations to emerge, there are some fundamental things that can be done at grass-roots level, including:

The positive promotion of male early years practitioners in booklets, promotional materials and websites including images and case studies

Challenging gender bias with parents, staff and the public – for example if they express concerns just because you have a male employee, or if they assume that ‘some jobs are only for women’. Research suggests that tackling this early in a child’s school education can have a significant impact

Raising awareness and promoting early years careers at all relevant opportunities - by visiting local schools and colleges, including all boys schools for example

Campaigning for better training, pay and recognition of the professionalism of the early years workforce

We spoke to a few of our Parenta male learners to find out how they chose childcare as their career; and what they thought about the lack of men in early years.

"I’ve completed my Level 3 with Parenta Training and not looked back since. I really do feel that the childcare industry is lacking male role models and I would encourage anyone who has an interest in looking after children to take up an apprenticeship - you won’t regret it! What my childcare training has shown me is the importance of these young children having a male role model during their time in childcare, not just at home."

“If you have enjoyed babysitting younger siblings then definitely consider childcare! I’m looking forward to starting my Level 3 so that I can continue my learning journey with Parenta. One of the main benefits of having a male apprentice in a setting is that so many of the children enjoy and benefit having a male presence, particularly when doing the more physical activities.”

“I’ve completed my Level 2 with Parenta and really looking forward to doing my Level 3 and then Level 5 too! Ideally, I would like to run my own childcare setting. I would really encourage any guys that are thinking about going into childcare to do it! There is probably not enough exposure for males working in early years and I feel like the children get so much out of a male carer, especially when doing sports activities.”