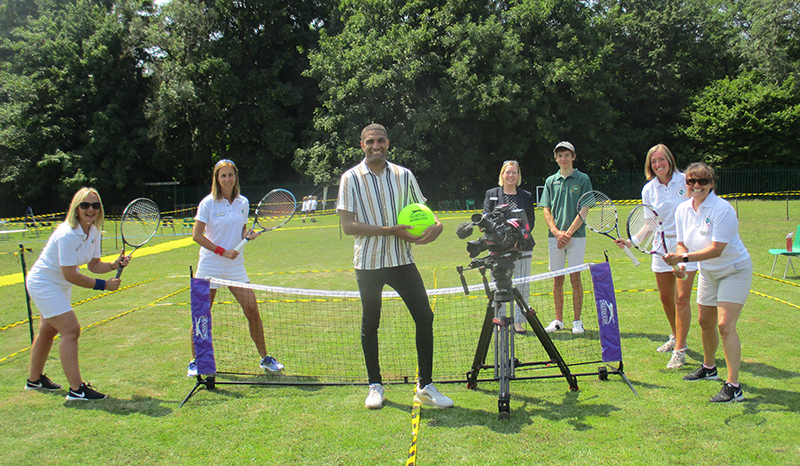 Teachers at Mereworth CP School recreated Wimbledon for the enjoyment of its year six pupils last week. The sporting event attracted the attention of BBC’s The One Show and presenter Richie Anderson who was thrilled to be a part of event. The children even enjoyed real Wimbledon strawberries donated by nearby soft fruit grower, Hugh Lowe Farms.

A mini centre court was constructed from hazard tape and a covered stand for the pupil spectators was erected in the middle of the playing field. It was a very warm day as the teachers nervously awaited the call. The Head Teacher, Amanda Lavelle, strictly umpired the match from her raised chair as the year 6 staff played a nail-biting match. The spectators, children from classes 6A and 6B, enthusiastically supported their own teachers, as the film cameras rolled.

During the break, copious amounts of strawberries were devoured by the grateful pupils who agreed that they were the tastiest they had ever experienced. BBC presenter Richie Anderson interviewed the children about the fruit. The children unanimously agreed the tennis was excellent and the strawberries were the sweetest they had ever tasted. Richie continued to provide a running commentary as the teachers concluded the match and the umpire announced the winners.

Head Teacher Amanda Lavelle commented, “We wanted to give the year six pupils something really wonderful to remember us by. We are so proud of how all of our pupils have handled the complications of the past few months.

This was a really special occasion. It is such a pleasure to support nearby soft fruit grower, Hugh Lowe Farms that work so closely with our school. They have grown the strawberries for Wimbledon for 26 years, and this mini Wimbledon took the honours as the 27th occasion….minus the superstars and the prize money!”

Hugh Lowe Farms has supplied The Championships for 26 years. The visitors to Wimbledon eat over 30 tonnes of strawberries over the fortnight. Hugh Lowe Farms is a family run soft fruit grower established over 125 years ago located in Mereworth in Kent, the Garden of England. The farm produces over 5,000 tonnes of fresh berries a year between April and November.