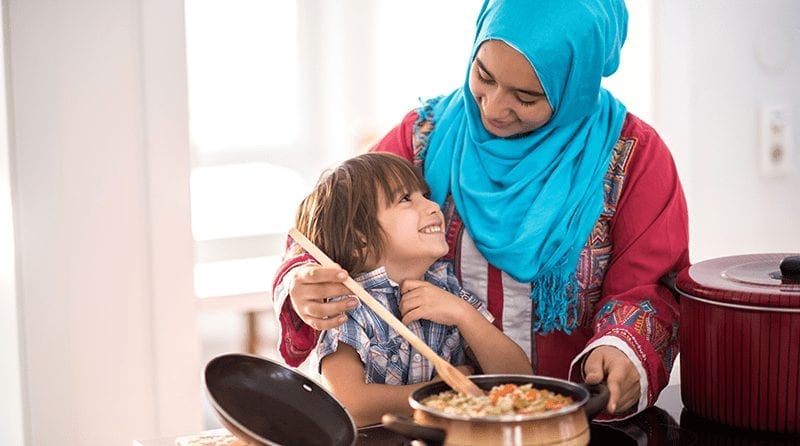 This month sees Muslims around the world celebrating the end of Hajj (pilgrimage) with one of the main festivals in the Muslim calendar, Eid al-Adha, also known as The Greater Eid.

Islam has many feast days and festivals, as do most of the world’s main religions, but unlike many Christian festivals, which exist on set days of the year (such as Christmas Day on 25th December), the Islamic calendar follows the lunar cycle, and therefore each year, the festivals fall on different days when defined by the Gregorian calendar of January – December which a lot of the world follows.

The current Islamic year is 1441 AH. In the Gregorian calendar, 1441 AH runs from approximately 31 August 2019 to 20 August 2020 because the Hijri epoch on which the Islamic calendar is based, began in 622 CE, when Muhammed travelled to Medina with his followers to found the first Muslim community.

Eid al-Adha begins at sunset on Thursday 30th July, 2020 and finishes at sunset on Monday 3rd August. In common with other religions such as the Jewish faith, the Islamic day starts at sundown rather than at midnight.

Approximately 23% of the world’s population follow Islam, with the largest concentrations of people in North and West Africa, the Arab states, the Middle East and Indonesia1 , although the religion has spread throughout the world and 1 in 20 (5%) of people in the UK identify themselves as Muslim2.

Islam believes that there is only one God, similar to Christianity and Judaism but Muslims prefer to call their God, ‘Allah’. Islam holds that there were many prophets including the patriarch, Ibrahim (Abraham) as well as Moses, Isaac, Jacob, Jesus and finally, Muhammad, who Muslims believe to be the last prophet from God. The main message of all the prophets was the belief in only one God and of human’s responsibility to show kindness and love to each other.

There are ‘five pillars of Islam’ which underpin the faith. They are:

Eid al-Adha means ‘sacrifice’ and is the celebration following the Muslim annual pilgrimage to Mecca (the Hajj), which all adult Muslims are required to undertake at least once in their lifetime. Muslims from all around the globe travel to Mecca, the birthplace of Muhammad, to say prayers at the Great Mosque, and visit the holiest of Islamic buildings, the Kaaba, which Muhammed is thought to have restored and consecrated to Allah.

Eid al-Adha also commemorates the prophet, Ibrahim’s obedience to God. Muslims believe that when God commanded Ibrahim to sacrifice his first son, Ishmael, to prove his loyalty, Ibrahim was so faithful that he was prepared to follow God’s command, even driving away the devil by throwing stones at him when he tried to persuade Ibrahim to disobey. But God was so pleased with Ibrahim’s obedience, that at the last moment, he replaced Ishmael with a ram/lamb (a
traditional sacrifice at the time), and Ibrahim’s son was spared, so Eid al-Adha is also known as the Festival of Sacrifice. A similar story of sacrifice is also part of the Christian and Jewish religions although in those religions, Abraham (Ibrahim) was told to sacrifice his second son, Isaac.

During the festival, Muslims may kill a goat, sheep or cow and see this as a symbolic gesture to remind them that they should serve others, and it is traditional for Muslims to take meat from the animal and distribute it to the poor. Many Muslims also donate to charity.

Attending the mosque as a family is also a tradition at this time of year, and families will dress up in their best clothes to pay homage to Allah. They also hold feasts and visit families and friends to celebrate together.

Eid al-Adha is a public holiday in Muslim countries, but Muslims in the UK may also take the day off work or school to celebrate this festival in the same way that many Christians take time off at Christmas and Easter to follow their own religious festivals. By participating in the celebrations and festival, Muslims show that they too are prepared to sacrifice their lives to God.

Ways to celebrate Eid al-Adha in your setting?

Whatever you do, have a fun time and remember to send us your photos to marketing@parenta.com. Eid Mubarak!