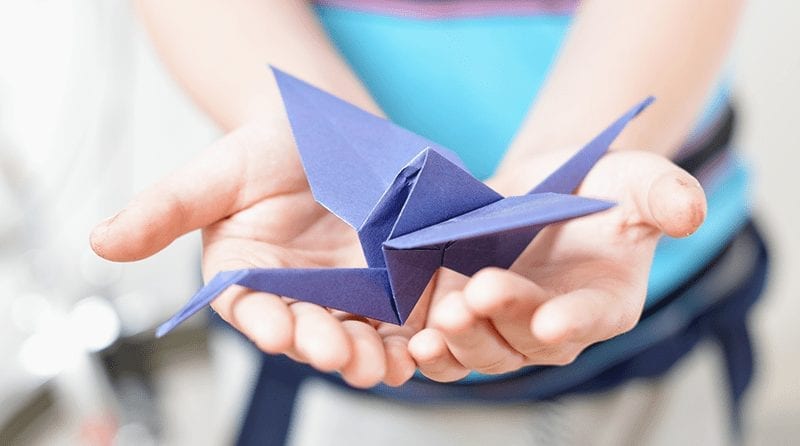 Hiroshima Peace Day is held each year on 6th August, the anniversary of the atomic bombing of Hiroshima.

Who was Sadako Sasaki?

Sadako Sasaki was only two years old when the atomic bomb was dropped on Hiroshima. She developed leukaemia as a result of the radioactive rain that fell over her city and was hospitalised in 1955. While in hospital, she was inspired by the ancient Japanese legend told to her by her father. According to folklore, anyone who can make 1000 paper cranes would have a wish granted by the gods. She spent her time folding origami paper cranes, hoping for a wish to cure her illness.

Sadly, Sadako died on 25th October 1955. The stories vary as to whether she completed her 1000 cranes – one states she managed to fold 644 and her friends completed the task after her death; and other state that she exceeded her target and folded 1400!

Following her death, friends and family raised funds to erect a lasting memorial in honour of both Sadako Sasaki and all
children impacted by the effects of the atomic bomb. In 1958 a statue of her holding a golden crane was unveiled in the Hiroshima Peace Memorial Park. A plaque on the statue reads “This is our cry. This is our prayer. Peace in the world”.

Every year on August 6th, young people from all over the world leave thousands of paper cranes at the memorial in
memory of Sadako and during the evening, a Peace Message Lantern Floating Ceremony is held on the nearby river. Some 50,000 local citizens and visitors, as well as ambassadors and dignitaries from around 70 countries, gather here and write messages of peace on the lanterns.

We’ve recreated Sadako’s paper cranes for our craft this month, and you will see it below, that with a few folds, you too will have many paper cranes, which the children can colour in using their favourite chalks or pencils, for added effect. We hope you enjoy our origami craft!

All you will need to create this craft is a square piece of craft paper. Although origami looks complicated, it’s just lots of paper folding and the children will just love the beautiful paper cranes they have made with you. 1. Fold the paper in half diagonally, unfold it and then fold it again in the other direction. Unfold the paper again.

2. Turn the paper over to the other side.

4. Bring the top point down to the bottom, while also folding the left and right corners down into the centre.

5. You should now have a diamond shape, with a crease running down the centre, which is now your square base.

6. Now starting with your square base, make sure the open end is at the bottom. Fold both lower edges to the central crease.

7. Fold the top section down and then unfold the previous three folds.

8. Pull one layer up from the
bottom, along the creases you just made and push the left and right edges inwards.

9. Turn the origami over to the other side and repeat the same steps of the squash fold on this side.

10. Next fold both lower edges to the central crease and flip the
origami over and do the same on the other side.

11. You should now have a diamond with two skinny “legs” on the bottom. Lift the upper right corner and fold it over to meet the upper left corner (like you’re turning the page of a book).

12. Pinch the skinny part and pull it away and then fold it on top to create the head.

13. Turn the crane around and pull the other skinny part to create tail (don’t fold it).

14. Fold down the wings and your crane is complete!