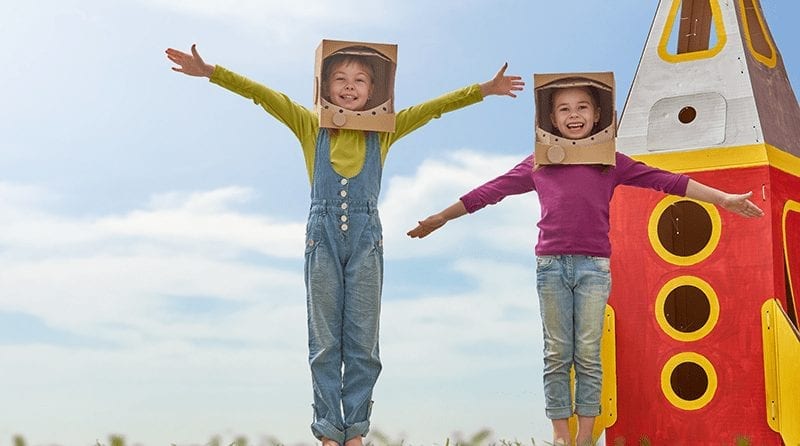 The first Wednesday in August (5th August 2020), is national Playday and we promoted it last year with suggestions of how to join in with big events organised across the country to encourage children to play. This year is different, due to the restrictions placed on gatherings and large social events because of coronavirus. So, in line with the official Playday site, we are championing something different this year, and that is a child’s right to play at home, giving you some research findings and tips we hope you will share with your parents/carers to help everyone get the greatest benefit that comes from everyday playing.

Play is crucial in promoting healthy child development1and the importance of parents playing with children (especially
fathers) was highlighted recently in research based on data from 78 studies2, which reported that children whose fathers spent time playing with them at a very early age, found it easier to control their behaviours and emotions, which can have a beneficial effect on children as they get older. Fathers tend to engage in more physical play like chasing, tickling and piggybacks, which researchers believe may help children learn to control their feelings.

What advice can you give to parents/carers to help?

Some parents play instinctively with children, but not all. A report on parent-child interactions at the Minnesota Children’s Museum3, suggested that parents may need some guidance to successfully facilitate play, and that they could basically take on one of 4 roles whilst playing with their children, including:

The roles that an adult takes on may be decided by several factors including the time they have available, their confidence in taking on the role, as well as the general confidence and needs of the child/children playing.

The same report also identified different types of play that children/adults can engage in, such as

In his book, “Children, Play and Development”4, Dr Fergus Hughes suggests a non-exhaustive list of ways that adults can enhance their child’s play in the early years, giving 4 important skills:

For more information on what these mean for parents/carers in a practical sense, see the article by Juliet Rayment on the benefits of play for children under 2. These ideas have been backed up with other data5 into the beneficial roles of sensitive and responsive parenting which suggest parents should tune into their child’s emotions, concerns and needs (sensitive) and then provide them with appropriate levels of support/reassurance (responsive), which apply equally well to playing as they do to dealing with a child’s behaviour.

Ideally, adults need to be sensitive AND responsive when playing with their children, whilst allowing the child/children to lead the play in the most part. Here are some ideas for ways that parents/carers can have fun with their children at home,
leading to benefits for the whole family.

Ideas for playing at home

It is easy nowadays to put a screen in front of children and expect them to entertain themselves, and there are times when we have all done this. However, in the spirit of the best play possible, why not suggest that parents think about?

Whatever you do, playing should be fun, so make it so!

THE POWER OF PLAY A Research Summary on Play and Learning