My Mummy is Autistic 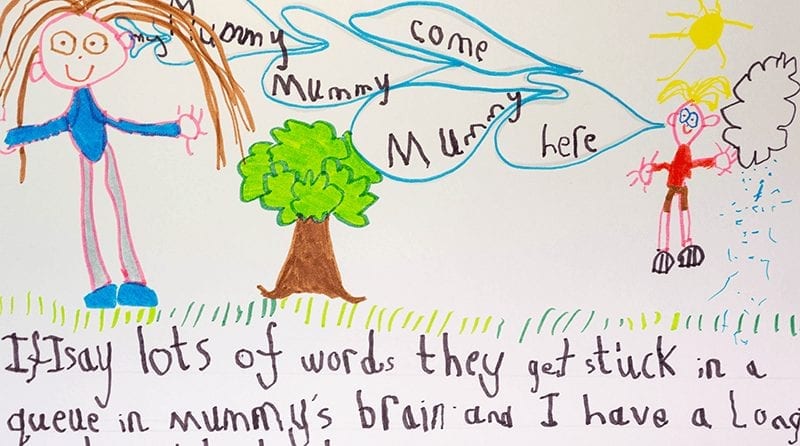 I am autistic. The pertinence of this to you is that having an autistic brain means I am capable of taking in vast amounts of information and organising this. A skill I use when I write articles about the sensory world for Parenta.

Experience has taught me to introduce my autism in that way. At the doctors I explain the significance of differences in my language processing. On a night out, I might explain the apparent lack of filter in what I am willing to talk about.

If I do not introduce myself in this way then people’s pre-existing presumptions of what autism means will colour how they view me. I often worry that prejudices will undermine what people think of me professionally.

When my son was 4 years old, the pertinence of my autism to him became apparent in a supermarket when I ran over his foot with a trolley!

He and I have a system when we go shopping: he writes a list, and I push the trolley. Originally this was my way of keeping him entertained. He would carry a list of scribbles around and I would chat to him about it, encouraging him to cross things off the “list” as we went.

Once I knew the list was real I milked it. He writes the list, he rides on the front of the trolley directing me, grabbing things, checking them off. Basically I am a princess when I go shopping, all I have to do is push the trolley, he does the rest! He loves the power. It has led to some puzzling conversations in the aisles. Another parent looked at me like I had grown a third head as I asked my then 3-year-old whether we could get crisps and was told very firmly “No, they’re not on my list.”

I process language slower than a neurotypical might. In a conversation, it is as if I have skim read what is said, I do take in everything but often only after the conversation has ended. Like everyone, when I am tired, this slows further.

One day I was tired. I was gratefully pushing the trolley whilst my son dealt with the shop. I was newly home from being away for a couple of nights delivering training and he had exciting news to tell me. I was watching him closely from my end of the trolley. Trying to keep up with the story. At some point, mid-sentence, he saw an item we needed, broke from what he was saying to say “stop” and leapt off the trolley. I was still two sentences back and didn’t hear his “stop.” Consequently I caught his foot as he dismounted.

He wasn’t badly hurt, more offended. “But mummy I said stop.” I apologised, and made a fuss over his foot. We continued the shop. I realised I couldn’t promise him I wouldn’t do the same again. As we were leaving the shop I explained to him how words queue up in my head and have to wait their turn to be heard. He had recently started school so the notion of lining up meant a lot to him. He looked at me suspiciously. It was the sort of nonsense an adult makes up to excuse their misdemeanours.

The next morning I checked his understanding, asking him if he remembered what had happened. “Yes you ran over my foot” (oh good! He remembered). I asked if he knew why, “Your brain is broken.” “Not broken” I corrected “it works differently.” He sighed, “Yes I know….” (This was not our first conversation about disability and difference) He began to explain and draw his explanation to prove his understanding to me. The drawing of words in the air squashing up against each other as they jostled for a position in my brain, was perfect. In his simple drawing I could see he understood how overwhelming that crush of words can be for me.

The summer holidays were just starting. I am a primary school teacher by trade so of course I was worried his writing skills might fade over the long break. “That’s really good,” I told him “I think you could explain my brain to other people, shall we make a book?” And so a small project began, with him writing a page each day. I expected us to stick them together ourselves at the end and have a ‘book’, but as it grew I wondered about sending it to a publishers.

I never imagined it would be published by Routledge and foreworded so beautifully by Chris Packham. It is unusual in the world of books about autism. It is not a ‘capable’ adult talking about a ‘disabled’ child. It is a child clearly explaining and understanding a difference in an adult. People connected with me on Facebook, will know that in the land of social media I refer to my son as “the small assistant.” The stated aim of The Sensory Projects is to contribute to a world where people are understood in spite of difference. Perhaps I should rename it The Sensory Projects and Sons!