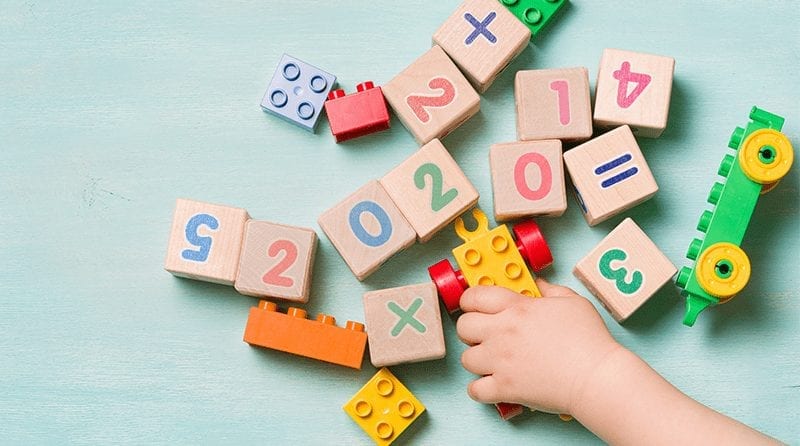 Maths can be tricky in the early years because working with numbers is such a conceptual topic - there is no object that is a "four", for example. You cannot pick up  a "four". You cannot smell a "four". And the younger the child, the more literal they are.

However, once children have been introduced to literal/physical objects and experiences, they are better equipped to recognise and respond to concepts and ideas. From Piaget to Bronfenbrenner, we know that children relate what they learn to what they already know. This is the reason that for years, experts have explained that children have better outcomes when they have a wide range of early experiences. For example, once a child has seen a sheep or travelled in a bus, they have developed a frame of reference for the next time they come across similar activities. If they hear a story or sing a song about sheep or travelling in a bus, they can relate to that experience through memory. And the brain continues to associate these feelings and actions with that experience automatically, long after the memory has faded.

Using music to relate to learning experiences can be a powerful tool. In order to sing together successfully, the words and music must be learnt and sung. In order to play the game, the rules must be followed at the right time. When we use music to relate to numbers, we need to consider the two main goals within early childhood maths: relating numbers to quantity, and spatial relationships (Williams, 2020). Music provides a non-confrontational way into developing both these mathematical skills, using familiar formats that most children enjoy: songs and games.

Here are some useful songs that support number-work in the early years – all available on Musicaliti’s YouTube and Sound Cloud channels, and soon to be available on streaming sources like Spotify, Deezer and Amazon.

Once I caught a fish alive

Then I let it go again

Why did you let it go?

Because it bit my finger so

Which finger did it bite?

This little finger on my right

This is one of the most familiar songs used when teaching counting because the 5-5 split matches our fingers on each hand. Research in 2008 shows that counting physical objects (even fingers!) is more effective than using pictures or computer-generated objects.

Round and fat with a cherry on top

Along came a girl with a penny one day

Bought a currant bun and took it away

This popular song literally begins to introduce children to the mathematical language of subtraction by relating a smaller quantity to “taking away”.

Alice the camel had nine humps …

This repetitive song is great for developing working memory and counting backwards, and can also be started at five if time is running short! And don’t forget the final verse with the punchline:

‘Cos Alice was a horse!

Understanding the way things fit together is another essential skill in maths. There is plenty of research to show that seeing patterns when working with numbers is a necessity. From junk models and puzzles, to following patterns and treasure maps, spatial awareness improves our ability to work with people, understand language and locate ourselves in new environments. Songs and games about movement, and using appropriate language, helps to create the literal and physical experience of these theoretical concepts.

Round and round the wheel goes round

As it goes the corn is ground

This is a lovely song that can tie into learning about where food comes from, specifically how corn can be ground to make bread. Holding hands and walking in a circle allows children to act out the language of the wheel movement. (During COVID times, it is essential to minimise contact with too many, and wash hands afterwards.)

This is a lovely leading song, where holding hands in a line leads the group to coil up in a spiral like a snail shell. The adult/leader takes smaller steps and models walking to the beat. (During COVID times, masks may be helpful, while handwashing is essential.)

You’re the one, my darling

You’re the one, my darling

The joy of teaching through songs and games is that they engage at all levels. Children with more musical/dancing experience may pick up concepts quicker, yet those who do not have the same experience are still able to join in with the game. Over time, the group as a whole will become more proficient and begin to see links between the games and written work.