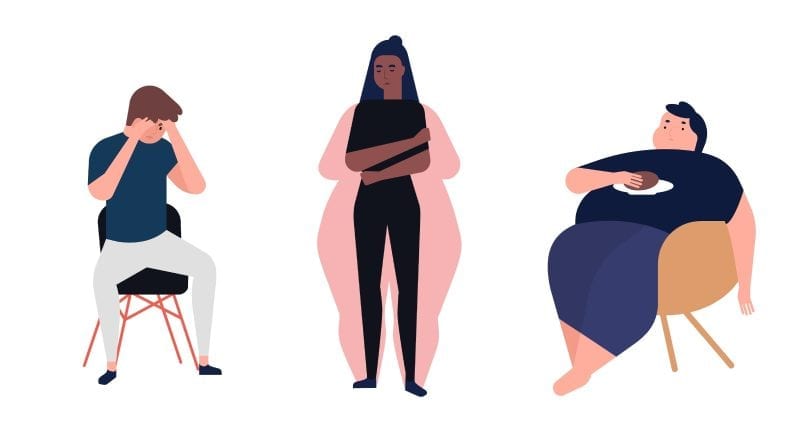 When you think of eating disorders, what images come to mind? People who can’t control themselves, or people who can? Men, women, teenagers or adults? Chances are, unless you are an eating disorders specialist or know someone who has an illness, your views will be influenced by things you see and hear in the media and like many, you may have a traditional view of eating disorders and the people who suffer from them – perhaps you imagine a thin teenage girl who won’t eat anything.

What are eating disorders?

An eating disorder is a serious and extremely complex mental health condition that significantly impacts upon many aspects of a person’s life, and also affects the lives of those around them. They involve disordered eating behaviours which might result in:

And whilst one common misconception is that eating disorders are found in people who cannot control their attitude to food, the reality is that the disordered eating behaviour is more likely to be a coping mechanism used to control their complex feelings and emotions. As such, they are not so much about food, but have an emotional, psychological and biological aspect which needs the right specialist care to overcome.

Estimates suggest that 1.25 million people in the UK are suffering from an eating disorder. They affect all races, ages, cultures, social groups and genders and it is interesting to note that although the majority of sufferers are female, 25% are male. One of the most thought-provoking statistics however, is the length of time that people experiencing eating disorder symptoms wait before they seek help, which is, on average, 149 weeks, or nearly 3 years. Imagine living with a severe illness for over 1,000 days before asking anyone for help. It doesn’t bear thinking about and yet if we want to tackle this problem, that’s exactly what we need to do – think and act more quickly. The sooner someone gets the treatment they need, the more likely they are to make a full and fast recovery, so seeking help early is important, as tragically, eating disorders carry an increased risk for both suicide and medical complications.

Anorexia nervosa – people try to keep their weight as low as possible by not eating enough food, exercising too much, or both

Bulimia – a condition where people sometimes eat a lot of food in a short space of time and then are deliberately sick, use laxatives, restrict what they eat or over-exercise to prevent weight gain

Binge eating disorder (BED) – people regularly lose control of their eating and may eat until they feel ill, and then feel upset or guilty

Other specified feeding or eating disorder (OSFED) – where symptoms do not specifically match one of the above conditions, but which is still serious

Avoidant/restrictive food intake disorder (ARFID) – a range of conditions where a person may avoid or restrict certain foods but is not associated with concerns about weight and body shape, but more to do with a response to a distressing experience

Symptoms to look out for

Many people wrongly believe they will be able to recognise people with an eating disorder by just looking at them. However, when you understand that these are serious mental illnesses, it becomes clear that behavioural changes, mood swings and other emotional challenges may be noticeable far sooner than any changes in someone’s appearance. There are different symptoms for each illness but there are some general signs to look out for which may be associated with all eating disorders. These include:

Early intervention is key so if you think you have, or someone you care for may have an eating disorder, then it is vital to seek advice and support as soon as possible. You can make an appointment to see a GP and there are also many helplines and support organisations that can help, offering advice, information and support to those who need it.

Many people with eating disorders do not recognise that they have an illness and so may be reluctant to seek help or they may feel that people are interfering, so denial is often part of the problem. Beat is a leading UK charity aimed at helping and supporting those with eating disorders. There are some useful tips and strategies for approaching people you are concerned about which you can access here plus lots of other information and advice on their website and you can access their helpline on 0808 801 0677.

Above all, remember that there is hope and many people make a full recovery so make that call or talk to someone today.