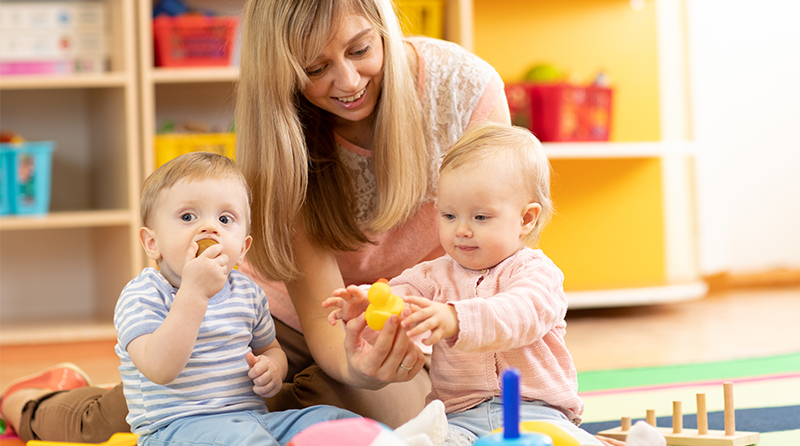 More2Childcare Nursery in Greenwich celebrated its five-year anniversary on Wednesday 21st April, with the Mayor, in an outdoor event.

Using grant money obtained from Greenwich Council, the newly renovated garden at the rear of the Forum at Greenwich, complete with a revamped forest school area, was host to the celebration. Emphasising our strong links with different cultures and language expertise, the nursery children performed songs from Ghana and Italy. They finished with an upbeat tempo version of – The Wheels on the Bus. The Mayor joined in with some of the actions and answered a variety of questions about her chain and badge from the curious older children.

The Mayor, who has formerly worked in Early Years and as a Primary Head Teacher, commented she was delighted to see the children enjoying the outdoor space which is so important to their development, especially in urban areas.

Kelly Salambasis, one of the three co-founders said, “Despite Covid restrictions, we were thrilled that by moving the party outside we could safely celebrate outdoors with the Mayor.

It is a huge mile-stone to have reached five years of operation and we are delighted to count ourselves as an independent, established and trusted nursery in Greenwich.

As a Community Interest Company, the local children and their families are our absolute priority and so we offer more than just childcare to them. Some of our initiatives have included membership schemes with discounts at local businesses, parent training courses, mentoring, a workhub, counselling for new Mums and parent and baby groups.

There have been so many high points in running a nursery – our proudest moment was receiving Ofsted Outstanding after just two years of operation.  Our toughest time has been the last thirteen months, but our amazing long-standing staff team stepped up to the challenge, enabling us to be one of very few nurseries that were able to stay safely open throughout the Pandemic”.

Established five years ago in response to the Local Authority nursery removing the baby provision, three local Mum’s and Business women set up More2Childcare, based at the Forum at Greenwich to meet demand for high quality nursery care.  More2Childare provides care for children aged 3 months to 5 years. After two years of operation in 2018 it was awarded Ofsted Outstanding.  Due to demand for places, a second nursery, More2Riverside, was opened at the River Gardens development in 2019.