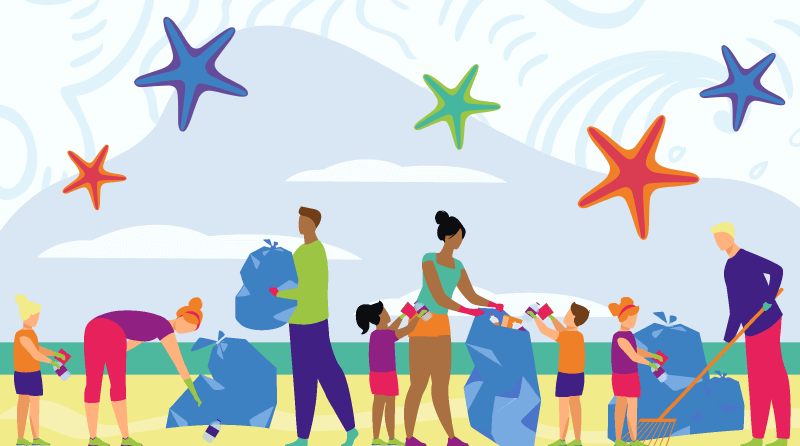 The UK is an island - an area of land surrounded by sea, and the sea has been instrumental in shaping modern Britain. Whether it’s brought Viking invaders, or helped Elizabeth I’s ships see off a Spanish invasion, or allowed Victorian explorers to establish an Empire on which ‘the sun never sets’, the oceans and seas around our islands have been critical to the success of our country for centuries. But now these oceans are being threatened and it is our responsibility to return the favour and protect the seas, oceans and marine life that has been so influential to our culture and way of life.

Between the 25th July and the 9th August, the Wildlife Trust is organising a two-week celebration of all things marine, as part of their campaign to protect our oceans and marine wildlife. National Marine Week, will actually last 15 days to allow for the variation in tide times around the country, so there will be plenty of chance to get involved, be that a visit to the seaside to collect some fossils, a chance to create some beach art, or a lecture on ‘ocean giants’ via a Facebook page, there will be something fun for everyone.

A visit to the webpage will reveal many activities which are being held at different locations around the country, many of which are specifically targeted at pre-school children. The Wildlife Trust is particularly interested in collecting data from a simple ‘shoreline spotting’ activity and they have produced a downloadable sheet to help, with pictures of marine wildlife such as wireweed, Chinese mitten crabs, common limpets and Pacific oysters but they’re also keen to hear about other sightings too.

The seas around the UK are home to a myriad of oceanic life including a few you might not think of as living around our shoreline such as seahorses, porpoises, basking sharks and bottle-nosed dolphins. Our coast is home to more than 8 million seabirds made up of 25 different species, many of whom migrate many miles to get to their breeding or feeding grounds at different times of the year. There are also a lot of amazing sea mini-beasts such as nudibranchs (pronounced nudi-branks and meaning ‘naked gills’) which are colourful sea slugs which get their colour from the food they eat. They literally have frilly gills on their backs too which are their breathing apparatus, so they have their lungs on the outside of their body.

One interesting fact about UK marine waters is that it’s not just the waters around the islands of the UK that we are involved with, since we still have a responsibility to many British or UK territories around the world too. In fact, the UK and our overseas territories together account for the fifth largest marine estate in the world. So we have a global responsibility to protect and nurture it and National Marine Week is the perfect opportunity to raise awareness of the issues and start to do something about them.

There are five main challenges currently facing our marine habitats:

One thing that everyone can easily do is sign the letter to the UK Government here encouraging them to support the creation and protection of Highly Protected Marine Areas (HPMAs) as soon as possible. HPMAs would offer the strictest possible protections for the marine environment. By removing all pressures from things such as fishing, sea angling and construction, shallow seas, shores and diverse seabeds can recover and be healthier, more productive, and full of life once more.

There are many suggestions of things to do during the fortnight on the website here, but if you can’t find an official event to visit near you, don’t worry, we’ve listed some ideas below of how you can support the initiative in your own setting, promote some marine conservation, and engage the children in some exciting ‘understanding the world’ and other related, cross-curricular activities at the same time.

You could complete the shoreline survey mentioned earlier, or if you don’t live by the sea, why not create a display using pictures of creatures that you would find in a rockpool such as crabs, sea anemones, limpets and sea snails? The National History Museum has some information here about how to get started and some of the things you can look out for. You could make it a sensory space too by thinking about the textures of the creatures and find a suitable substitute for the children to touch.

You can use items that you collect from a beach if you live near one, or use some sand, shells, fossils, drift wood (sticks) and pebbles if not. See if you can create some unusual sea creatures using the items and let the children use their imaginations!

Go on a litter pick

A lot of our rubbish finds its way into the oceans damaging marine habitats and killing wildlife. Picking up litter wherever you live and disposing of it properly will help reduce this. Remember to wear protective gloves and clothing.

Use #NationalMarineWeek and let others know what you are doing.

Sing some songs about the sea

How about “The big ship sails on the Ally Ally O” or “Five little seashells”? You can get the children to move around like different sea creatures as well. See here for some ideas.

Julia Donaldson’s “The Snail and the Whale” is a perfect way to introduce the notion of our human responsibility to marine creatures.

You can make starfishes, crabs, snails and fishes. Then let the children make up stories about their adventures.

Whatever you do, let us know by sending your pictures to hello@parenta.com