Celebrating Diwali, Festival of Lights in your setting 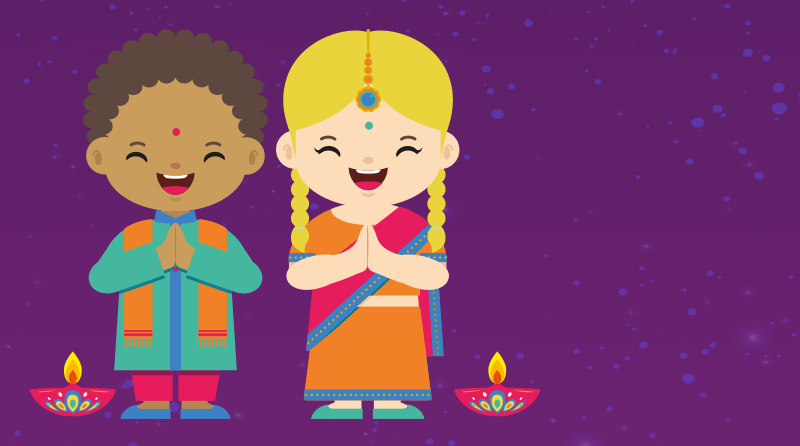 practiced religion in the world behind Christianity and Islam, and is considered to be the world’s oldest religion, dating back more than 4,000 years. It is celebrated by Hindus, Jains, Sikhs and some Muslims and Buddhists around the world, and this year, lands on 2nd - 6th November.

Hinduism is an eclectic religion which does not claim to have any one Prophet or worship any one God, nor does it have a single central belief, making it difficult to describe to lay people. It is perhaps best described as a ‘way of life’ which can include many different spiritual and secular practices including meditation, yoga, worship, duties, respect for nature, the seeking and giving of wealth/security and pleasure, and honour of the family.

How is Diwali celebrated?

Diwali is a 5-day festival in which Hindus traditionally do certain things on certain days. Like Easter, its exact days are based on a lunar calendar, so the dates change each year.

Day one – people often clean their homes and clear out old things in preparation for the main festival.

Day two – houses are decorated with small, clay oil lamps known as diyas. It is traditional to draw or use coloured sand or rice to decorate the floor outside the front door with a bright, colourful pattern (rangolis).

Day three – this is the main Diwali festival and people go to the temples to worship and honour the Goddess Lakshmi. They can share food in the temple, decorate them with rows of diyas and end the day with feasts and fireworks.

Day four – this is the new year for many Hindus, and it is celebrated by exchanging presents with family and friends.

Day five – this day is traditionally a day to celebrate the sibling relationship and so people see family, and share traditional foods such as laddoos and gulab jamun, celebrating with music and dance.

Diwali is a festival which you can celebrate in many ways in your setting. We thought it would be fun to come up with different ideas based on the Early Learning Goals.

Hindi is one of India’s official languages along with Urdu, and over 60% of Indians speak Hindi. It stems from Sanskrit but has also been greatly influenced by Persian and Arabic. You could teach the children a few Hindu words related to Diwali and here are a few easy ones to get you started:

Teach your children some classical Indian dance, one form of which is known as Bharatnatyam. It was originally a temple dance for women and is often used to tell religious stories. The movements are characterised by bent legs and turned-out feet with symbolic hand and arm gestures called mudras. You can find some basic steps at https://www.bbc.co.uk/newsround/54833725 or you could try some easy Bollywood dancing.

One of the teachings in Hinduism is about the connectedness of all things and the idea that we should live a kind life, which is in balance with nature to create good karma. You could explore what kindness/karma mean in your circle time to see what your children think being kind to others means. You could have a ‘kindness day’ where the aim is to be kind to everyone you see, by a kind word or a kind deed such as sharing toys, or swapping small gifts.

There are books that you can use in storytime about Diwali that explain what the festival is about and how people celebrate it. Twinkl has recently released “Dipal’s Diwali” which explains how the protagonist, Dipal, celebrates Diwali with his family, but there are others such as “Let’s Celebrate 5 Days of Diwali!” by Ajanta Chakraborty and “The Diwali Gift” by Shweta Chopra.

Since there are 5 days in Diwali, you can base your number work around the number 5. This is a good number for early years children because it is the number of digits on each hand. Make some hand prints using paint and then label the numbers 1 to 5 and get the children to practice writing their numbers. You can also cut out paper images of diyas and arrange them in different patterns, or cut out different sized circles and petal shapes and get the children to make their own rangoli patters with the different shapes. Explore symmetry too by making folding paintings. Draw a line down the centre of a piece of paper and get the children to paint on only one half of the paper. Then fold it in half so that the image is transferred onto the opposite half. When you open it up, you should have a matching, symmetrical image on both halves of the paper.

Teach the children some facts about India – you could show where it is on the globe, look at some examples of traditional Indian dress and talk about some of the differences that exist between the two countries. Why not consider things like?

There are many arts and crafts ideas that you can use to celebrate Diwali such as making paper lanterns, pictures of fireworks or rangoli patterns. You could decorate the floor outside your setting with chalk rangolis. Remember to make them bold and colourful to welcome in the Goddess Lakshmi into your setting. Another idea is to make some Indian sweet treats and there are some simple, no-cooking recipes which are suitable for toddlers. Diwali is all about light defeating darkness, so you could encourage your children to interpret this themselves and give them free reign over what to draw to show this.

Remember to send us in your images and stories to hello@parenta.com to let us know what you get up to.