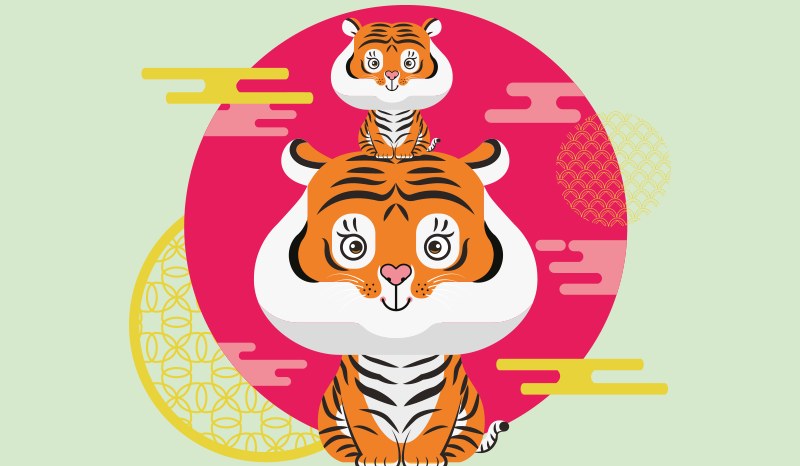 On the 1st January each year, many cultures celebrate a New Year according to the solar-based Gregorian calendar, and this year, most countries will celebrate the birth of 2022 at the stroke of midnight. But did you know, that although this is the calendar used in the international standard for representation of dates and times, known as ISO 8601, it is only one of many New Year celebrations that people mark over the course of a year? You might have read our recent article about Diwali in November which is the New Year celebrations for many Hindu, Sikhs and Jains in India. The Bengali people in India celebrate New Year in April, Jewish people celebrate Rosh Hashanah in September or October, and many Celts and Pagans celebrate Samhain as New Year’s Eve on October 31st, starting their New Year on November 1st. In Islam, they use an calendar that is based on the phases of the moon and is shorter than the solar year used in ISO 8601.

One of the most famous and longest New Year celebrations is that of the Chinese New Year which occurs around January/February each year, and in 2022 will be celebrated starting with New Year’s Eve on January 31st, followed by New Year’s Day on 1st February. The celebration, also called the Spring Festival, lasts for 16 days ending with the Lantern Festival on the full moon on February 15th. It marks the end of the coldest part of winter and the start of new beginnings. Like Easter, the exact date is based on the cycles of the moon and begins on a new moon day, usually the second new moon after the winter solstice (21st December).

During Chinese New Year, most Chinese people will get 7 days holiday at the start of the festivities and many people will begin thoroughly cleaning their houses before that to sweep out the old year and welcome in good luck for the new one. Factories are closed and people return to their families from the big cities. The Chinese zodiac has 12 houses like the Western zodiac, but whereas the Western zodiac cycles last approximately one month, the Chinese ones last a year and are named after animals such as the pig, horse and dragon. The New Year starting in 2022 will be the year of the tiger and people born within that year are predicted to be competitive, brave, confident and unpredictable. Interestingly, when it is your Chinese zodiac birth year, (known as benmingnian), it is thought that people with that birth sign (i.e. the tiger) will have their unluckiest year rather than their luckiest one. The signs come around every 12 years, so the last year of the tiger was 2010. The 12 signs of the Chinese zodiac are shown above with their corresponding New Year’s Day.

How is Chinese New Year celebrated?

Around the world, many people from China and other Asian countries celebrate by gathering with their families, eating special foods and setting off fireworks although fireworks are banned in some places due to concerns about air pollution. Many children receive red envelopes containing money. Red is a colour that symbolises good luck and traditionally people prayed to their gods or their ancestors. If you’ve seen the film “Mulan”, you will know the importance of ancestors in looking after the people, even after death. In life, people visit their elderly relatives and pay their respects by doing 3 ‘kowtows’ to the elders. A kowtow is where people kneel on the floor and bow forward, putting their head on their hands which are on the floor. It is considered the ultimate mark of respect.

Chinese New Year is also traditionally a time for fighting off demons and monsters such as a demon called Nian, and there are many myths and legends about people fighting these creatures and overcoming them. Red is supposed to be useful in fighting demons so many people also hang up red decorations such as lanterns, red chilli peppers or red paper during this time to ward off evil spirits.

It’s traditional to eat dumplings every day, although you can have too much of a good thing! And since new clothes are also believed to bring good luck, many people will add some new red clothes to their wardrobes too. At the end of the festive season is the Lantern Festival or the Yuanxiao Festival, a night of partying and freedom.

As well as trying to attract good luck, many Chinese people actively try to avoid bad luck by avoiding certain things during the New Year period. So people avoid saying negative words and don’t demand debt repayments. It is also thought to be bad luck to break a ceramic object or to clean your house on New Year’s Day. You’re not supposed to take a shower on this day or get a haircut either since using scissors, knives or other sharp objects is thought to risk bringing in bad luck.

Celebrating in your setting

Chinese New Year can be celebrated in different ways and we’ve given you a few suggestions below to help you make the most of this season. It also lasts just over 2 weeks so there will be plenty of time to try a few of our suggestions.

Whatever you do, remember to send us your stories and pictures to hello@parenta.com.