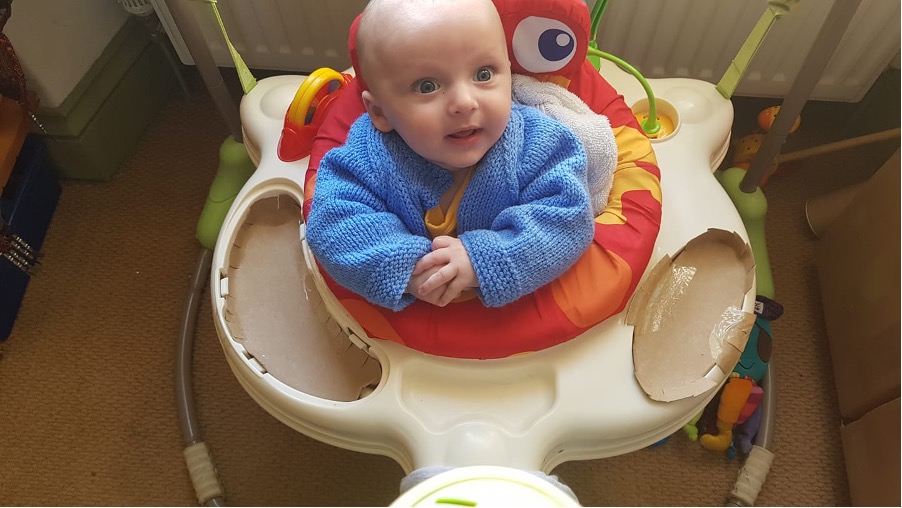 I do not know how he came to acquire the nickname Egg but ever since he came along that’s what my youngest son has been called. I run The Sensory Projects www.TheSensoryProjects.co.uk (which should now really be called The Sensory Projects and Sons!) My work focuses on people with profound disabilities and sensory differences, but my son’s advice will apply to your work too.

In this series of articles we are going to share his insights with you, if you are keen for more there is an ever growing collection on my Facebook profile: come and make friends. www.Facebook.com/JoannaGraceTSP

This is article 8 out of a series of 10! To view the others click here.

I got the gadget featured in Egg’s photo second hand from Facebook marketplace. I picked it up late at night having got lost several times along the way (I live in rural Cornwall, I drive a tiny car, but these people lived at the end of a network of roads so tiny that I could pick flowers from the hedgerows out of my windows on both sides).

A man opened the front door and regarded me quizzically, (they had probably given up on me arriving) and then his expression changed as he realised what I was there for. “Ah, you’ve come for the circle of neglect! I can’t wait to get rid of this thing.”

His wife’s eyes shot daggers across the room at him. I was paying, she did not want to lose the sale. He recanted. “Ah, no, it’s been very good, it’s just” – he nodded in the direction of pictures of his children on the kitchen wall – “they’ve all grown out of it.” And then, to his wife’s despair he added “it just takes up so much bloody space and makes so much noise!” I laughed and agreed.

I had borrowed one similar from the Toy Library when my first son was young and, although it filled our tiny living room, we had both loved it. Him for all the things it offered to explore, and me for the chance to drink my coffee without risk of spilling it on him.

The man and I somehow managed to get it into my little car and I drove home, getting lost several more times along the way. A trip that the sat nav said should take 10 minutes ended up as over an hour.

*Note this post mentions people becoming overwhelmed by sensory experiences, if you are struggling with behaviour in your setting and think it might have a sensory cause, consider studying “Exploring the Impact of the Senses on Behaviour” with The Sensory Projects online college www.TheSensoryProjects.co.uk/online-college

My Mummy bought me a new toy, there was so much to do. When I bounced it made lots of noise, lights flashed and music played. It was very, very exciting, but also quite overwhelming.

Then Mummy found a way of popping off all the gadgets, she has replaced them with cardboard trays. Up high where the dangly toys used to be, she has strung up a piece of string.

We do still have all the original toys, but Mummy puts them out one at a time so I can appreciate them fully when I play with them.

(These words first appeared on Jo’s Facebook profile you are welcome to send her a friend request to watch out for more insight www.Facebook.com/JoannaGraceTSP) Joanna provides online and in person training relating to sensory engagement and sensory differences, look up www.TheSensoryProjects.co.uk/online-college for more information. Consistently rated as “outstanding” by Ofsted, Joanna has taught in
mainstream and special school settings, connecting with pupils of all ages and abilities. To inform her work, Joanna draws on her own experience from her private and professional life as well as taking in all the information she can from the research archives. Joanna’s private life includes family members with disabilities and neurodiverse conditions and time spent as a registered foster carer for children with profound disabilities.

Joanna has published four practitioner books: “Multiple Multisensory Rooms: Myth Busting the Magic”, “Sensory Stories for Children and Teens”, “Sensory-Being for Sensory Beings”, “Sharing Sensory Stories and Conversations with People with Dementia” and “The Subtle Spectrum”. Plus three inclusive sensory story children’s books: “Spike and Mole”, “Voyage to Arghan” and “Ernest and I” which all sell globally and her son has recently become the UK’s youngest published author with his book, “My Mummy is Autistic” which was foreworded by Chris Packham.