Media coverage over the weekend implied that the government were quietly attempting to re-introduce the debate on childcare ratios, with an online survey for parents promoted on social media channels.

The survey, entitled "Ratios in nurseries and other childcare settings", was promoted by the Department for Education and asks 10 questions of parents who have a three- or four-year-old at nursery. Every question related to either staffing levels or teaching qualifications.

Since the media questioned it’s relevance and motives, however, the poll has been removed from the survey website, creating even more questions.

The survey asked "Do you know how many members of staff there should be for the number of children in your child's nursery? If yes, what is the ratio? If no, what do you think it should be?"

It added multiple choice questions including "Do you look to the nursery's Ofsted report? Which aspects in particular concern you?" and offers six possible answers including "safety" "what the children learn" and "the ratio of staff to children".

Given the fierce resistance to the proposals in the summer, it seems the Government may be trying to avoid another confrontation with the Childcare Industry by removing the survey.

In June, the Conservative children's minister, Liz Truss, was forced to drop the plans by Nick Clegg, the deputy prime minister. 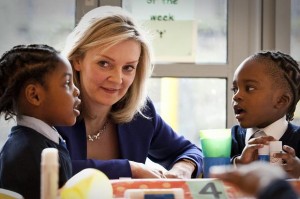 A senior Liberal Democrat source said: "There is no prospect of the coalition government revisiting the issue of childcare ratios. Nick Clegg made very clear they cannot proceed. The issue has been put to bed and will not get up."

The DfE has also been criticised for limiting the reach of the survey by using social media sites Facebook and Twitter to receive responses instead of publishing it on the department's own website.

The Professional Association for Childcare and Early Years (Pacey) has also criticised the survey and questioned the usefulness of any information gained from feedback. Liz Bayram, chief executive of Pacey, said: "Pacey is concerned to hear that the Department for Education is consulting parents on childcare ratios, given that there was widespread criticism of the department the last time it proposed this reform.

"We also question how this crude approach to gaining parent feedback is going to provide the DfE with any meaningful information."

A DfE source said that the survey was part of a fact-finding exercise which hoped to be able to examine the attitude of private nursery users – but the source struggled to explain why the survey does not ask parents to say whether their children are cared for in private or public nurseries. A spokeswoman said: "In 2008 ratios were relaxed so nurseries could have classes of up to 13 children aged three or over when led by a teacher. School nurseries take advantage of this flexibility, whereas private nurseries are less likely to do so.

"We have always said we want this flexibility to be used more widely – because evidence shows that teacher-led provision improves outcomes for children – and it is important that we explore what barriers are preventing nurseries from doing this."

We'd love to hear your comments below.